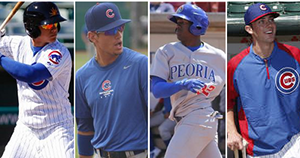 Baseball America is the last large publication to release its top 100 prospect list for the 2014 season, and it is a list that, generally-speaking, really loves the Chicago Cubs.

The Cubs netted seven total prospects on the list, tied with the Pirates, and behind only the Red Sox (8), which is compliment enough. But look at the prospect placements:

Outside of Almora and Alcantara, those slots are generally higher – and, in some cases, considerably higher – than where these prospects wind up on other lists. The top two really stick out, as does C.J. Edwards, ranked as the 13th best pitching prospect in baseball.

For those who don’t consider Masahiro Tanaka a prospect – I do not – you can bump all of those guys up a spot, because Tanaka was ranked fourth. That means, for all intents and purposes, Baez is the fourth best prospect in the game (and Bryant the seventh – wow), behind only Byron Buxton, Xander Bogaerts, and Oscar Taveras. Bryant, then, is behind only those guys, plus Miguel Sano and Carlos Correa. You can also bump up the guys behind Edwards a spot, because Cuban Jose Abreu, 27, is ranked at 29, and I don’t really consider him a prospect either.

Bumping those two spots makes Soler’s ranking “feel” better, since it starts with a 3, and softens the relatively harsh take on Almora. For what it’s worth, it sounds like Almora’s ranking was influenced by his injuries last year, and a need for talent evaluators to see him stay on the field for a full season. That’s understandable.

After seeing Alcantara rise to 52 on the FanGraphs list (ZiPS wants to marry Alcantara), you may be disappointed to see him at, effectively, 98. But most of the other lists had him in the 75 to 90 range, so this isn’t that far off.

All in all, it’s a very complimentary take on the system, and ends the top 100 rankings season on a high note. I can’t wait to see how these players progress in 2014, as well as the bounty of quality prospects behind them. Consider that, at this time last year, Alcantara and Johnson would have been nowhere to be found on lists like these, Bryant wasn’t even drafted yet, and Baez was viewed as a consensus top 40 type, not a super elite type.

"Why did the Rangers ever trade C.J. Edwards?" -pretty much every team in baseball #BA100

The scariest thing about Javier Baez isn't his freakish bat speed or power. It's how much he improved all around last year. #BA100

Jorge Soler should be a Top 25 prospect next year as long as he's healthy. Bat speed, 70 power, good approach. Could be a monster. #BA100

That Soler one, in particular, makes me very happy.

BA also revealed some numerical insights into the list, which is worth a read. Among the more interesting notes? Of the top 100, more than half (52) were high school draft picks (the rest were an even split between college draftees and international signings), and 59 came from the first or supplemental first round of the draft.