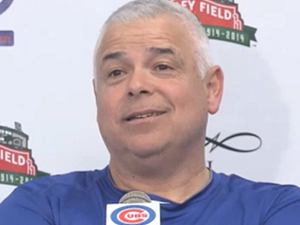 Yesterday, Chicago Cubs owner and chairman Tom Ricketts addressed the media on a variety of topics, including some really salient stuff on the Wrigley Field renovation and rooftop discussions.

But the focus of his comments was the inevitable question, and the inevitable answer, about the Cubs’ chances of making the playoffs in 2014. To much ridicule, Ricketts said that he believes the 2014 Cubs can make the playoffs. Every few years it seems like a team surprises, he said, and this team has a solid, young nucleus that could be very good.

To be quite clear, no reasonable evaluator of big league rosters can look at this iteration of the Cubs and say that they are a playoff team. Even saying that the team has a chance to make the playoffs feels a bit disingenuous, although it is technically true (probably somewhere in the 1 to 2% range, depending on your projection system of choice). But my take on Ricketts’ comments was that he was in a no-win position: if he says he believes the Cubs can make the playoffs, he’s dubbed a fool or a liar. If he says anything else, today’s headlines would be all about how even the owner doesn’t believe in the Cubs – why should the fans come out to the park at all?

Further, shouldn’t we expect everyone associated with the Cubs to be expressing positivity right now, in Spring Training? Isn’t that, like, what you do? Isn’t that the message they want to send to the players? Hell, don’t fans want the players to believe they can win?

I just don’t see the issue here. An owner of a team was asked if his team can win, and he said yes. Expecting him to say otherwise makes no sense to me, and maybe that’s just a personal idiosyncrasy that I can’t get past.

But, for the record, Ricketts wasn’t alone.

In his write-up on Ricketts’ comments and a variety of other things yesterday (including Theo Epstein’s plans to stay with the Cubs long-term), Paul Sullivan took Ricketts’ comments to Epstein and asked him on whether he thought the Cubs could make the playoffs this year. At first, Epstein said all the right things that critics of Ricketts say he should have said – the goal is the playoffs, you want to get off to a good start, and you never know what might happen, etc. But, Sullivan pushed Epstein on the specific question. Can the Cubs make the playoffs this year? Epstein said yes. When pinned down to the specific question, what else was he supposed to say?

Similarly, Carrie Muskat asked manager Rick Renteria if he agreed with Ricketts that the Cubs could make the playoffs. Not only did RR agree, he took it a step further: “I think we expect it.” For so many reasons, that’s the attitude I want the manager to have.

The point here, of course, is not that the 2014 Chicago Cubs are likely to make the playoffs – or even 3% likely – but instead is that this is just what teams say in the Spring. And it’s probably what they – the owner, the president, the manager, the players – should say.