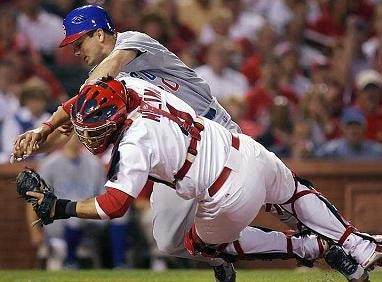 It’s not exactly a no collisions rule, but things are going to look a little different than they have in the past.

Here’s the new rule, which is a one-year experiment for now, from the MLB press release:

So, basically, you can’t try to blast the catcher unless he’s in your way already, and the catcher can’t block the plate unless he’s already got the ball. It’s kind of a flabby rule, subject to a great deal of interpretation. But one thing appears reasonably clear: there can still be a collision if the catcher already has the ball, is blocking the plate, and the runner hits him while trying to score.

That’s what a lot of collisions already are, but I suppose this strongly urges runners to slide, if at all possible, and urges the catcher to set up off of the plate and swipe tag. That was the intent, as that would increase player safety, but this language is kind of thin. Indeed, it kind of seems like this is what the rule already should have been.

I guess we’ll see how this plays out. These plays will be subject to the new review system, by the way.