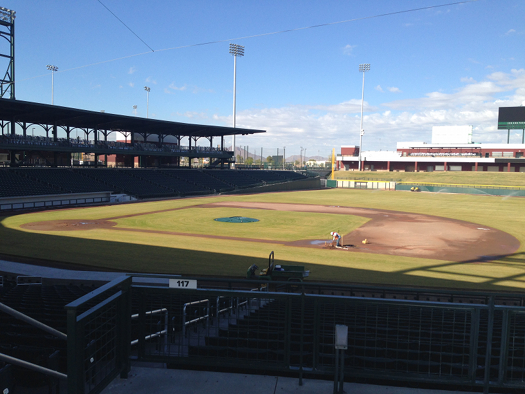 Today, the Chicago Cubs open the doors on Cubs Park in Mesa, Arizona, and kick off their 2014 Cactus League schedule by welcoming the Arizona Diamondbacks. Jeff Samardzija gets the start for the Cubs, and new signee Bronson Arroyo will start for the Diamondbacks. Yes, it’s the hair versus hair matchup you thought we’d lost when Arroyo left the Reds.

Wesley Wright, Alberto Cabrera, Justin Grimm, Pedro Strop, Blake Parker, Hector Rondon and Jose Veras are among the relievers who are expected to see action today. It’s interesting that, so far, Cabrera is very much being treated as a reliever, despite his success last year at AA upon being converted back into a starter. Perhaps, because he’s out of options, the Cubs are acknowledging that, if he’s going to make the team, it’s going to be in the pen.

Today’s game is on WGN-TV, or you can listen to the audio on Cubs.com.

Some interesting bits in there. Junior Lake starts in center field, which is somewhat meaningful, given that Justin Ruggiano instead takes left (and Ruggiano is someone who can play center). If the Cubs weren’t thinking about Lake as a possible center fielder, and wanted him to lock down left field, that’s where he’d be playing from day one. I am happy about this development.

Emilio Bonifacio is in at second and in the leadoff spot. Mike Olt gets a start, and it will be *very* interesting to see him at the plate. He doesn’t start at third, reportedly because of some shoulder soreness. He tells Carrie Muskat that it happens every year, so it’s not necessarily a concern.

Welington Castillo is behind the plate, which is a good sign that he’s definitely over any lingering effects from his late-season (minor) knee surgery last year.