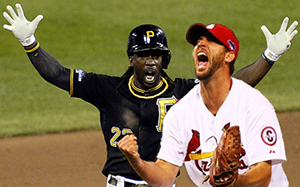 When you’re a bad team in a good division, the unbalanced schedule in MLB will probably not favor you. And when your division sports three playoff teams from the previous year, and projections are based on records from that previous year, the schedule is going to look all the more grim.

It’s with that perspective that I’m completely unsurprised to see that the Cubs face the toughest early-season schedule in the National League, according to Buster Olney. It would have taken quite a mathematical and scheduling feat for that not to be true.

Even still, it’s a hell of a first couple months. Of the Cubs’ first 40 games, 31 come against teams that were .500 or better last year. And 21 of those 31 are against the Cardinals, Pirates, and Reds, alone. Yes, suffice it to say, it would be a banner year for the Cubs to come out of the gate hot.

The cold, hard truth is that the Chicago Cubs’ 2014 roster, understandable though it might be, is not constructed to be a playoff contender. There are great individual stories to follow, and certainly don’t tell the players that they don’t have a chance. But if the Cubs are going to be that 1 in 40 team that looks like this on paper and yet still makes the playoffs, it’s going to take winning early and often. In that regard, maybe it’s a good thing that so many of the early-season games come against good teams, and especially the three top dogs in the NL Central.

Imagine that the Cubs faced a weak early-season schedule, and didn’t play many against the Cardinals, Pirates, and Reds until the second half. Maybe then the Cubs surprise early, keep the team together at the Trade Deadline, despite valuable overtures lobbed in their direction, and then fall on their face in the second half when they actually play the very teams they’ve got to beat. Is that better than losing early to those same teams, knowing what you really are and what you really aren’t, and then better positioning yourself for the future at the deadline?

*(We’re not talking about competitive baseball in August and September, mind you. In this scenario, the Cubs would merely look like a maybe-possibly team in mid-July, but then quickly and clearly out of it by mid-August.)

Maybe that strikes some as an ugly question. And, if pressed, I’m not certain I might not just say, “eff the future, give me some meaningful games in June.” But if I can step back, I’ll probably concede that it’s better to know whether the Cubs are truly a .500 or better team in the first half, or whether they beat up on a bunch of cream-puffs and lucked into a .500 record on July 15.

Then again, even if the Cubs are only better than the cream-puffs, maybe that’ll be a good enough sign not to sell off midseason anyway. It’s all academic, though, since that early season slate doesn’t look like it will be easy. If the Cubs are at .500 come June 1, I’d call that an enormously pleasant surprise. A big enough surprise, in fact, that it would probably change the shape of the rest of the season.