Jason Hammel Working the Sinker - A Reason for Optimism? Skip to content 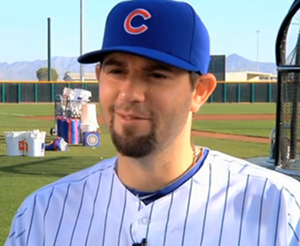 When the Chicago Cubs started pursuing Jason Hammel this offseason, one of the reasons I was particularly intrigued was a look at how his seasons have played out the last two years. In 2012, he was quietly fantastic, and in 2013, he struggled (partly due to the arm issue, probably).

Here’s what I said:

Well, if getting that groundball rate back up by relying more heavily on two-seamers (which acts as a sinker for Hammel) is the ticket for Hammel, he recently suggested he’s got that on his mind.

In discussing his exhibition debut with the Tribune last week, Hammel specifically mentioned his use of the sinker, and implied that he could use it quite a bit more this year. As the numbers suggest, Hammel has been at his most effective in recent years when incorporating that sinker heavily. It makes me happy, then, to hear that he’s already thinking about utilizing it this year. We’ll see early on if that’s Hammel’s focus this year, and if he’s getting that groundball rate back up.

Although groundballs go for hits a little more often than flyballs, they rarely go for extra bases. And sometimes, they generate two outs. That is all to say, groundballs are a good thing. And if Hammel generates a whole bunch of them this year, the Cubs are going to be very happy with their one-year investment.

The Cubs, under Chris Bosio as pitching coach, seem to have had some success in ticking up groundball rates for pitchers generally, so there is a reason to believe this could be a very nice combination. After coming to the Cubs, the groundball rates for all of Scott Feldman, Edwin Jackson, Travis Wood, and Paul Maholm increased, and Jeff Samardzija’s has climbed rapidly over the last two years.