Is There Suddenly a Chance that Stud Lefty Carlos Rodon Falls in the Draft? Skip to content 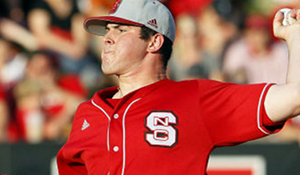 As far back as last Summer, everyone seemed to know who the top pick in the 2014 draft would be: N.C. State lefty Carlos Rodon. Were he available to be drafted last year, he almost certainly would have gone first. While he’s not quite the Stephen Strasburg/Bryce Harper type (seriously: how freaking lucky were the Nationals that those two guys just happened to be in the two drafts they picked first?), he’s the kind of stud who probably immediately enters the top 10 prospect rankings in all of baseball upon signing.

The Astros pick first in this year’s draft, and they’ll be taking Rodon, assuming he stays healthy this season.

Well, that has been the prevailing wisdom for a long time, but in a chat yesterday, Keith Law snuck in quite a bit of doubt:

[Rodon] hasn’t pitched up to expectations – fastball has been average, command average or a tick below, and he’s not missing bats. I thought a month ago he was the clear 1-1 pick, but now I don’t see it.

Wow. That’s not Law saying there’s a tiny chance Rodon doesn’t go first – he’s saying, as of right now, it wouldn’t happen. Through 30 innings this year, Rodon’s sporting a 2.40 ERA with 30 strikeouts and 7 walks (and 6(!) HBP). Those are great numbers, but, for a college ace at the top of the draft, you’d like to see more strikeouts. Still, it’s just four starts, so the numbers tell you only so much. It’s the questions about the fastball and the command that make you wonder. Later in the chat, Law questions whether Rodon has enough going for him other than the fantastic slider in order to go at the top of the draft.

Plus, you’ve got a guy like Tyler Beede dominating at Vanderbilt and another guy like Jeff Hoffman (East Carolina) whom scouts love physically. It sounds now like there are legitimately other college arms worth considering at the top of the draft besides Rodon, and that’s not to mention the high school talent like Tyler Kolek, Alex Jackson, and Jacob Gatewood.

There was a time before the 2012 draft that Mark Appel seemed a mortal lock to go 1.1, but bonus demands (and the new CBA/the Astros’ strategy) made him slip, and then the CBA made his drop accelerate as lower teams felt they couldn’t afford to sign him if they picked him. He went 8th to the Pirates, and was not signed.

So, maybe Rodon really does end up slipping, and maybe he’s actually there for the Cubs at four.

Before you go over the moon dreaming about the Cubs landing Rodon in the June draft, keep in mind three things:

(1) I still don’t think he’s going to slide, and a guy like Rodon sliding all the way to four seems extraordinarily unlikely;

(2) When a guy like Rodon slides, it’s a double-edged sword. Yes, it’s a shot at a stud you didn’t think would be there, but he likely slid for a reason (other guys popping up, combined with reduced scouting love); and

(3) The Cubs’ slot value for the fourth pick might approach $5 million, but the slot for the first overall pick is likely to top $8 million. If Rodon, a junior, is expecting to receive $8 million in order to sign, he could really hold the Cubs’ feet to the fire if they take him with that 4th pick. They could go over slot to get him, but they’d have to get creative in later rounds, and it’s a risk. For a talent like Rodon – assuming he didn’t slide for reasons that take him off of your board – you still might take that risk. Some team will.

Number two is the one that concerns me when constructing my own, mental narrative about a draft prospect. There’s so much hype about certain guys for so long that it’s easy to ignore that these are very young players for whom an entire additional amateur season is still to be played (minus a handful of games so far this year). That’s a boatload of additional data and scouting available on these guys before the draft takes place. If Rodon slips between now and June, it’s going to be because “the marketplace of ideas” has absorbed new information about him, and he’s no longer the guy we thought he was a year ago.

That said, the idea that there’s even a discussion here excites me because it further opens up the possibilities to the Cubs at four. The more stud players in the draft (well, not too many) there are, the better chance the Cubs get *the* guy they want with their first round pick.

Who knows? Maybe it’ll end up being Rodon.