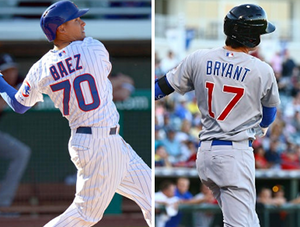 I always told you that Yahoo’s Jeff Passan was a smart guy.

His recent piece on Chicago Cubs prospects suits my purposes there just fine, as he goes to great lengths to not only praise guys like Javier Baez and Kris Bryant, but also to distinguish them – and the current prospect-driven rebuild – from the Cubs prospect ghosts of the past. Passan also nods toward other top Cubs prospects, and the balance of his piece is a belief that the Cubs really could be good in the relatively near future because of these prospects.

This passage from Passan, in particular, is in some kind of meta way the very poetry he’s trying to describe in Baez’s swing:

Baez, 21, remains with the Cubs, and so remains, for now, the most incredible swing in the game. Not the minors. The whole game. To see Javier Baez swing a baseball bat is to see the most compelling argument yet why God gave human beings wrists. Bryant’s swing is understated beauty; Baez’s is what Bamm-Bamm Rubble grew up to do. His high school coaches tried to temper it, Baez said, only to find a rigid truth: “I just can’t slow it down. It’s my swing. I can’t swing nice and easy.”

It’s a big leg kick, and a torso angled forward at about 15 degrees, and a back elbow bent so high his bat, for a split second, is pointing at the second baseman, and then somehow his wrists propel it from that awkward position down through the zone where it whip-cracks like it belongs in a torture dungeon. Baez’s hips separate, he carves the path of his uppercut swing and the ball is read its last rites. The pain ends quickly.

It’s a great read from Passan, even if only to tell you things you already believe about the Cubs’ future.