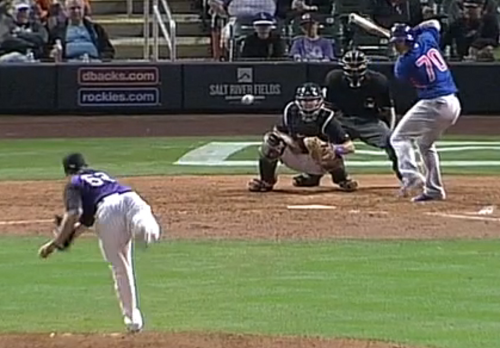 It’s becoming a nightly ritual: Javier Baez plays, Javier Baez does amazing things that we want to watch over and over again. Hopefully that’s the story at the big league level soon.

Up first, there’s the scary highlight. It’s Baez colliding with left fielder Anthony Giansanti as they converged in no man’s land on a pop-up in shallow left. At first it looked like Baez hurt his knee, but then it was apparently his wrist that was bothering him. Prepare to be terrified:

Fortunately, the trainers and Baez felt like he was well enough to stay in the game, and there’s really not much discussion of the collision this morning. So I guess he’s fine. Whew.

Now we can just enjoy this.

The play-by-play call? “Wow. That was really, really far”:

Reports have that ridiculous bomb to center going better than 450 feet, which, lulz.

I still firmly believe there is genuine development value to be gained by Baez starting the year at AAA Iowa – let’s keep in mind, much of his Spring success is coming against guys who’ll soon themselves be in the minors – but, whew boy, it’s just so much fun to watch him. Every time he comes to the plate, it’s a must-watch experience. When was the last time you remember saying that about a Cubs player? Sammy 10+ years ago, right? Hell, who can you say that about today in the big leagues? Cabrera and Trout, and that’s about it. Davis last year, I guess. It’s a really short list.