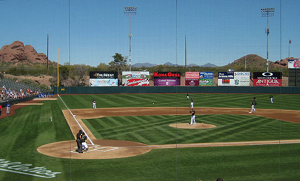 The Cubs head to Phoenix Municipal to play the A’s today on another WGN game, so you get you watching on. Jason Hammel gets the start as he’ll put in his final long outing before the regular season.

Mike Olt makes another start at third base today, having played there yesterday and on Thursday (and he DH’d on Friday). This is the stretch where he’s very much being evaluated for a roster spot, which would presumably come along with a full-time starting gig.

Junior Lake flops back over to left field again today, his second start there. As I’ve said, I’m hopeful that the Cubs will just bite the bullet and give him a full and fair shot to show something in center field before putting him in left, where I don’t think his bat can carry the day long-term.

Apropos of today’s Luis Valbuena discussion, The Bat Flippa is playing second base today, while Darwin Barney fills in at shortstop. Ryan Kalish starts in right field, which you could read as a signal that the Cubs are preparing for life without Nate Schierholtz, or you could just calm down and recognize that it’s Spring Training and Kalish has played all over the outfield (as he would if he makes the team).