The Increasing Importance of Power in Baseball, and the Cubs' Excellent Position
Search
Skip to content 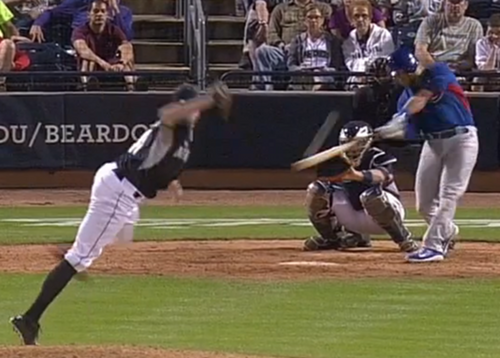 Pitching is gold in baseball. An ace pitcher is, and always has been, the most valuable commodity in the game. However, in today’s MLB, there is an asset that’s become nearly as precious, arguably more so: power. With the explosion of home runs at the turn of the century, many started taking power for granted. Thirty home runs and .500 slugging percentage were numbers that were barely acknowledged.

While people who grew up watching eighties baseball may scoff at those numbers, the fact is, the power surge we saw from 1994 changed the game. It’s unlikely that baseball will shift back to a more speed-oriented philosophy. Yes, game-changing speed is nice (see: Hamilton, Billy), but it’s power that front offices covet.

That isn’t to say that suddenly slugging has overtaken on-base skills as the strongest corollary for scoring runs. The St. Louis Cardinals were 13th in the NL in home runs, but first in runs, which lines up with their NL-leading .332 OBP (of course, being tops in the NL in doubles, and posting an insane (and record-shattering) batting average with runners in scoring position (.330), helped as well). No, it’s not that power is the key to a strong offense, it’s that power, specifically home run power, has become harder to find than ever over the last 20 years, making it all the more desirable.

Just how much is power coveted? Mark Trumbo, who plays spotty defense wherever he’s positioned and possesses a sub-.300 career OBP, netted the Los Angeles Angels two solid pieces for their rotation in Hector Santiago and Tyler Skaggs (and there is a very good chance Skaggs could be much better than solid now that his mechanical issues appear to be a thing of the past).

Trumbo delivered such an impressive return for one big reason: the Diamondbacks wanted a power bat to team with Paul Goldschmidt. And Trumbo has combined for 95 home runs over the past three seasons, tying him for fifth most during that time span. Add in the fact that Trumbo is just 28 and has three more seasons of team control left and it’s clear why the Angels were able to extract so much value from a player who possesses just one skill.

Power is why a soon-to-be 42 year old Raul Ibanez, who slugged 29 homers last season, still finds work. It’s why Marlon Byrd, who combined for 22 home runs from 2010 to 2012, was able to snag a hefty three-year deal from Philadelphia after hitting a career-high 24 home runs last season. And it’s why the once seemingly untradeable contract of Alfonso Soriano actually brought the Cubs a very intriguing prospect in power pitcher Corey Black.

Power is what makes the lack of elite pitching in the Cubs system a little easier to swallow. Javier Baez and Kris Bryant are proving to be two of best power-hitting prospects in baseball. In addition to those two elite talents, there is the power potential of Jorge Soler, a slimmed-down Dan Vogelbach (for those worried his weight-loss will sap his power, one scout told me he was the same size in high school, when he built his reputation for hitting the ball insane distances, but now is stronger and more flexible), and a seemingly healthy Mike Olt. Of course, there’s also the raw 17-year-old Eloy Jimenez, who draws comparisons in size and style to Soler. Add it all up and the Cubs have the largest stable of power hitters in all of baseball.

Not only do those players possess the ability to hit 25-plus home runs consistently at the major league level, unlike Trumbo, they have at least one more tool that projects to be average or better. To top it off, they’re young and cost-controlled. It’s a collection of power hitters that leaves opposing front offices drooling at the opportunity to acquire such talent if any were to hit the market (and just to be clear, there’s a near-zero chance that Baez or Bryant would be available, but the others could likely be had for the right price).

(This doesn’t even touch on bats that aren’t known for their power that could be used in trades sometime in the future like Arismendy Alcantara, Christian Villanueva and Jeimer Candelario. It’s quite remarkable that not only have the Cubs built a farm system that’s clearly among the best in all of baseball in just a few years, but they’ve created so much depth that making an aggressive trade or two won’t knock them too far down those rankings.)

The dearth of power we’re witnessing is not confined to the professional ranks. Talk to any scout who spends a significant amount of time watching amateur baseball and they’ll share how offense, and power in particular, has become nearly non-existent, especially at the college level. Bryant’s power display last season was the primary reason he shot up draft boards and power is one reason the Cubs could go with a bat in the draft for the fourth straight summer.

While many are focused on the college arms (Carlos Rodon, Tyler Beede, Jeff Hoffman and a few others), along with high schoolers Tyler Kolek and Brady Aiken*, it’s not out of the question that the Cubs go with a bat yet again. North Carolina State shortstop Trea Turner is a possibility, but there have always been questions about his bat and he certainly has never offered much in terms of power. There are other non-pitchers who will definitely intrigue the North Siders, but it is power bat Alex Jackson who could entice the Cubs to surprise many and steer clear of an arm. The catcher/outfielder out of San Diego appears to be one of two high school bats (along with shortstop Nick Gordon out of Orlando) on whom the Cubs have narrowed their focus, as things continue to evolve and they determine who to take with the number four pick in June.

*Kolek came into the season as the best high school arm, while Aiken has recently shot up draft boards. Both are in the argument to be the number one pick, a spot once assumed to be locked down by Rodon. However, Kolek looking like a Jonathan Gray clone (with a touch less command) and Aiken being a lefty with a plus breaking ball and a fastball that has ticked up to the mid-90s has vaunted them into the conversation at the top. Add in the fact that Rodon’s velocity has dipped and his command has been anything but sharp this season and we get mass confusion at the top of the draft. However, teams still have two and a half months to figure things out, plenty of time for things to work out on their own.

The bottom line is, the accumulation of power hitters gives the Cubs the opportunity to fill holes on the major league roster via trade. The obvious area to shore up would be starting pitching, but the combination of the Cubs finally building some legitimate pitching depth in the farm (the list of arms who could pop up in 2014 to go along with the already established C.J. Edwards and Pierce Johnson is long) and some interesting names possibly hitting the free agent market next offseason doesn’t make trading for an established top of the rotation starter an absolute necessity.

Of course, the latter requires that those pitchers (among them, Max Scherzer, Justin Masterson, James Shields and Jon Lester) not sign extensions with their current clubs, and that the Cubs change their recent course of action of predominantly avoiding big-money free agent bidding wars.

When you lose as much as the Cubs have over the past few years, it’s unlikely it was due to a deficiency in just one area, so it’s not just pitching that could help this club. Over the next year, it’ll become clearer just where the depth built in the farm can be most useful to the Cubs in the trade market. If Anthony Rizzo or Starlin Castro don’t develop into the hitters many thought they could be, taking some pressure off Javier Baez and Kris Bryant to produce at a high level immediately upon their arrival to Wrigley, those assets could be used to acquire a veteran bat.  How the trade market evolves over the summer and into the offseason will be one of the more interesting things to keep tabs on for Cubs fans.

Yes, 2014 likely won’t be much fun as far as the Cubs record is concerned, but there will be Javier Baez’s ascension to the bigs, the continued progression of the minor leaguers (especially the pitchers) and which sub-30, impact players on other teams may become available for a collection of prospects. The combination of the trade assets and a possibly pitching-rich free agent class should make next offseason much more interesting for Cubs fans than the last four months … and possibly the next six.

And, in the meantime, who doesn’t like watching some moon shots? With the game continuing to change, fans are likely to appreciate the Cubs’ stable of young power even more in the coming years.