Is It Already Time for the Jose Veras Conversation? Skip to content 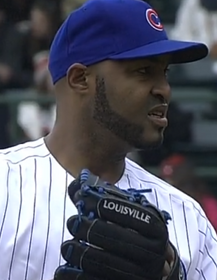 The Chicago Cubs picked up a sure-fire closer this offseason – at least insofar as, the moment he was signed, the Cubs said Jose Veras was their closer for 2014.

So, is that it? Is that enough for us to have “the conversation” about Veras as the Cubs’ closer? After all, it took only a few bad outings at the outset of 2013 for then-closer Carlos Marmol to lose his job. That decision was generally held by fans and pundits as a solid showing of decisiveness, and a necessary evil. Would yanking Veras now be the same kind of virtuous reaction?

I’m not so sure about that just yet.

When Dale Sveum employed an itchy trigger finger with Carlos Marmol in 2013, there was already some history there. Marmol had had a very nice second half in 2012, but we’d seen the Good Carlos/Bad Carlos dichotomy before. When Marmol was good, he was freaking nails. When Marmol was off, things could get really dicey and fast. Heck, in that “good” 2012 stretch came after Marmol had temporarily been shuffled out of the 9th inning mix.

There was also the question of how much value the Cubs could reclaim in Marmol, even if he pitched fantastically from April until late July in 2013. That is to say, there were reasons for possible trading teams to be concerned about Marmol’s ability in the second half, even if he was pitching well at the time, based on warning signs in the preceding couple years. The risk, then, if keeping Marmol in the job probably had limited upside.

With Veras, those issues aren’t quite as present. Yes, prior to 2013, Veras walked a lot of guys, but he tended to make it work. There isn’t quite the same history of implosion risk there, and, indeed, in 2013, Veras was just flat-out great. If Veras looks good from here into July, he’s going to have legitimate, albeit not enormous, trade value. A touch more rope is probably due with Veras than was due with Marmol in early 2013.

Does that mean Veras remains the closer through thick and thin for weeks and weeks of struggles? Of course not. We can’t ignore the fact that, prior to 2012, Veras was generally a solid, but not back-end-dominant reliever. Indeed, prior to 2013, he’d never been a closer. If a pattern develops soon, Ricky Renteria won’t be able to bury his head in the sand. (I really wanted to say “in the ivy” there, but it felt a little hacky.)

I’m simply saying it may not quite be time to pull the plug on Veras because he blew one one-run save (in a marathon game that saw him get up and down five times before actually coming into the game), and because he couldn’t find the strike zone with a seven-run lead. The second one is, admittedly, far more troubling, but, even still. It’s just one outing. At least the curveball looked nasty, and the movement on his changeup (that ball that darts to the right is his changeup, right?) was similarly sick. He just didn’t seem to know where it, or his fastball, were going.

Veras obviously has the stuff to be a great late-inning reliever, and the Cubs might as well give him a little more time to see whether he can establish himself in that role (he’s had only one save opportunity, after all, and it was kind of a wonky one). Thankfully, they aren’t lacking for other interesting options at this point.