So, We've Got to Talk About the Sacrifice Bunting Skip to content 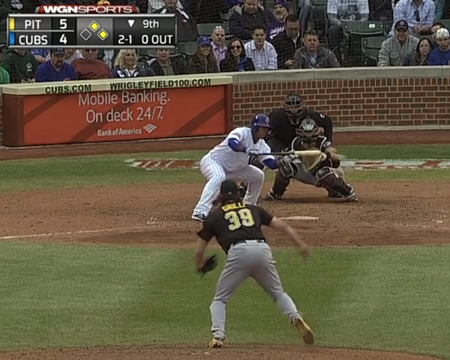 A warning: if you consider yourself aggressively “old school” and averse to having your preconceptions slapped down by some data, you’re going to just want to skip this post. Otherwise, you might wind up hating me, and I wouldn’t want that. I like to be liked. We’ve got to talk about the bunting, man.

It’s early, and it’s cold, and the Cubs are facing good pitching, and on and on. I know the justifications for the frequent sacrifice bunt attempts by the Cubs this year, but we can’t ignore the numbers.

Consider this: in 2013, with a runner on first base and nobody out, a team is expected to score about 0.83 runs in that inning. And, with that guy on first, the team considers bunting so that the runner can get into “scoring position.” Here’s the problem: even if the sac bunt is successful, and the runner is on second with one out, the team’s run expectancy goes down to about 0.64. That’s right: by succeeding in that situation with a sacrifice bunt, the team is now statistically likely to score fewer runs than if they’d not tried the bunt at all (and it’s not a small drop, either: it’s nearly 25%!). We can debate whether this is different with a pitcher at the plate, but, with regular position players (or modestly decent hitting pitchers), there is no debate at all.

In the first inning, Ryan Kalish attempted to bunt Emilio Bonifacio over from second to third with nobody out. To be clear up front, Kalish was clearly trying to get a hit, so it’s unclear whether the bunt was called from the dugout, or was entirely on Kalish. I have nothing against trying to bunt for a hit. But, since we’ve seen plenty of bunting already this year in situations like that, and because we’re just trying to have a discussion here, we’ll proceed as though it was an attempted sacrifice bunt (even though, on the balance, I think it was a, “I’m going to try and get a hit, but if it winds up a sacrifice, that’s OK, too” kind of thing).

Is that a good situation to sacrifice? Well, unless it’s the 9th inning and you need only one run to win, the answer is no. A team’s run expectancy with a runner on second base and nobody out is about 1.05 runs. On third with one out? That number drops to about 0.89. Surprised? You shouldn’t be. In virtually every situation, it’s a terrible idea to trade an out – a precious, precious out – for a single base. And when it’s the top of the order, and the first inning? You can pretty much read all of this as me saying it extra loudly.

I think it’s fair to debate, in that very specific situation, whether it was OK to sac bunt in an effort to get that lead runner to third base – i.e., playing for the tie. To me, I’d rather take my chances with Valbuena and the bat in his hand (if only for the chance to see an epic flip on a walk-off homer – can you imagine how high that thing would get? I bet the bat would clear the grandstand).

Once again, the point here is less about poo-pooing the specific events of yesterday, and more about poo-poo the entire idea of leaning on sacrifice bunts as a better way to create offense than just not giving away outs. Everyone loves phrases like “small ball” and “moving runners over.” They sound great in theory, but the numbers clearly do not back up the theory. Don’t make outs. That’s a theory I can get behind.

Which brings me to the giant problem with sacrifice bunts that almost never gets discussed: sac bunts aren’t always successful!

These calculations are all predicated on a successful sac bunt. As we saw yesterday with both Kalish and Valbuena, those at bats don’t always end in success. Each player took a strike, bunted foul, and then struck out. That’s not an uncommon outcome for a sacrifice bunt attempt.

Indeed, over the past two decades, the success rate for sacrifice bunt attempts has vacillated right around 70%. Think about that. When a guy tries to lay down a sacrifice bunt to advance a runner, he fails nearly 1/3 of the time.

To put it more plainly, when you ask a guy to sacrifice bunt in the vast majority of situations, you are doing two things:

(1.) Actively trying to reduce the number of runs you score in that inning; and

(2.) Putting your batter at a 30% chance of recording an out (or worse) for nothing.

Are we still friends?