Cubs Minor League Daily: Only In The Minors Skip to content 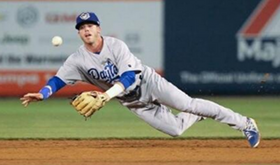 If you were watching on MiLB.TV or listening to the Tennessee Smokies game on Sunday you were witness to a couple very unusual baseball events. First, Tennessee batters hit the Birmingham pitcher with batted balls twice. On consecutive batters. The first one clipped his foot and redirected away from the second baseman for a single, and the second bounced off his upper thigh for an infield single. I’ve seen the pitcher hit by a ball before, but never by consecutive hitters.

A little later in the game the third base umpire in a great position on a ball down the line signaled foul, watched a second longer, changed his mind and called it fair. Needless to say Birmingham wasn’t too happy about that, but Stephen Bruno never stopped running and got his extra bases.

You may have also seen the hot dog come from behind to pass what I think was the Italian sausage at the finish line in the ballpark food race, but that sort of thing happens in the minors all the time. For the record, I was cheering for the taco. If it hadn’t been for a terrible turn in the right field corner he would totally have had that one.  Next time, taco.  Next time.

Iowa –
Friday – Iowa once again got some good pitching, but they still lost 1-0.
Saturday – A blowout, but in a bad way. Iowa lost 12-2.
Sunday – Three errors did not help as Iowa lost their third straight 6-0.

Tennessee –
Friday – The Smokies scored first, but ultimately lost 5-2.
Saturday – This game was close all the way, but it ended with a 5-4 Smokies loss.
Sunday – A big fifth inning propelled the Cubs to an 8-3 win.

Daytona –
Friday – Bad weather postponed this game…
Saturday – … and setup the doubleheader on Saturday. Daytona dropped the first one 10-4, but finally broke through in Game Two for a 9-1 win.
Sunday – Sunday was a scheduled day off.

Kane County –
Friday – Kane County was shut out on Friday, 9-0.
Saturday – This game was lost in the bottom of the ninth, 3-2.
Sunday – The Cougars had Sunday off.