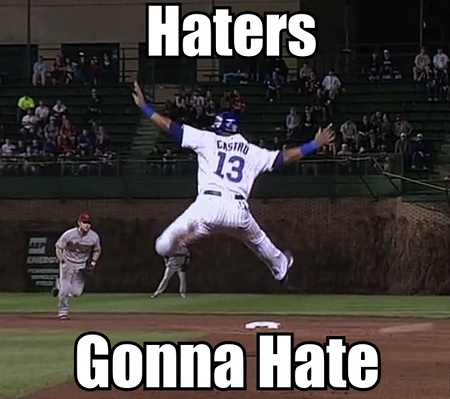 Among the things I find delightful to follow in a give season: huge days, and their impact on season stats. It’s kind of a silly exercise, especially in April, but it can also be a lot of fun. As someone who tries to find meaning in statistics, and to find reason in a morass of unsupported narratives, I like the idea that the “story” about a player can suddenly change because a ball went over the wall, instead of flying just two feet shorter and being caught. The latest huge day for the Cubs came yesterday from Starlin Castro, who has, to my eye, looked like a much improved batter this year*, even if the numbers weren’t quite reflecting it. And, in one day, he turned so much of that on its head, going 3-4 with two homers.

(Thanks to Section 503 for grabbing the useful Castro screenshot for meme-ifying.)