On This Day in Cubs History: Lee Elia's Rant Skip to content 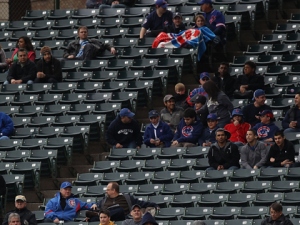 The Chicago Cubs have, unfortunately, had some bad starts over the years. That was true in 1983, when the Cubs started 5-14 out of the gate.

And, 31 years ago today, Cubs manager Lee Elia did something magical in response to that start, and what he perceived to be a lack of fan support (warning, NSFW language like whoa):

That year’s team would go on to bottom out right around 6-17, before posting a winning record the rest of the way

Mostly I just hope that things go next year they way they did for that 1983 club. The 1984 Cubs won 96 games (under new manager Jim Frey, and during the rebuild of Dallas Green) and made the playoffs. Then some things happened that I don’t remember. But the point is, even after things look as dark as they did back when Lee Elia was popping off, it can all turn around quickly.

Of course, if you’re not in the mood for the positive mojo, just enjoy the rant. While I don’t like the liberal use of a particular slur that was probably a lot more acceptable at the time, the thing is full of memorable and clever quotes. I guess fans are just more supportive now than they were back then …