Junior Lake's Problem This Year? The Whiffs Skip to content 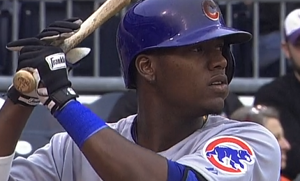 You don’t need advanced metrics to know that Cubs outfielder Junior Lake is not having a good year. He’s hitting .206/.242/.365, and he’s done a great deal of that in a platoon-protected role. If you watch him, you can see that, although he’s quieted some of his movements at the plate, he still doesn’t seem to be seeing the ball well.

In sum: for the month of April, Junior Lake hasn’t looked like a great hitter.

The thing about advanced metrics that I love, however, is the ability to dig into the things that our eyes can’t see. To provide context. To understand why a player is or isn’t performing a certain way.

And, when you drill down into the “why” on Junior Lake’s season, the answer comes flying at you harder than the kind of screaming liner he hits when he does make contact. We knew that Lake was striking out too much – at 43.3%, his strikeout rate would by far lead the Major Leagues if he had enough plate appearances to qualify. But, specifically, what’s going on with Lake’s game that is leading to those strikeouts? Is it something that we expect to positively regress? Is he just taking too many pitches?

Unfortunately, no. It’s just the classic hitter problem: Lake is striking out so much because he’s swinging and missing too much. For Lake, though, the classic problem has been a nightmare, as the extent to which he’s whiffing is single-handedly torpedoing his season thus far.

First things first: Junior Lake swings a lot – 54.6% of the time he faces a pitch this year, he swings at it. Among players with at least 60 plate appearances, that’s the 19th highest rate in baseball. As you can see from the other top-listed players, a high swing rate is not, alone, a problem.

The problem arises when those swings aren’t generating much value. Lake makes contact on his swings just 62.3% of the time (37.7% whiff rate), which is 5th worst in all of baseball.

Brooks Baseball allows us to break things down even further, by pitch type – and we can bring in Spring Training data to beef up the sample a little bit. Against fastballs, Lake is whiffing 27% of the time he swings. That might not sound all that bad, but, according to data guru Harry Pavlidis, who hooked me up with some numbers, the league-wide whiff rate on fastballs this year is just 17.8%.

Worse, Lake is whiffing 49% of the time he swings at a breaking pitch, and 63%(!) of the time he swings at an offspeed pitch (changeup or splitter). Some league average whiff rates against which to compare those: 40.3% splitter, 35.6% slider, 33.8% changeup, and 29.9% curveball. Any way you slice it, Lake is swinging and missing – particularly against non-fastballs – much, much more than league average.

Unfortunately, this isn’t an entirely new story for Lake. Even in his successful partial 2013 season, Lake was whiffing 34.5% of the time, which would have placed him ahead of exactly one qualifying player in baseball last year (Chris Carter, 34.6%). When you look at individual pitch types, his struggles weren’t quite as bad (against fastballs, his whiff rate was closer to 25%; against sliders, it was 46.5%; against curveballs, it was 47.5%; against changeups, it was 45.5%; against splitters, it was 55.0%), particularly against offspeed pitches.

So, what does the data tell us? Lake has probably always had a lot of swing and miss in his game, and he showed it even in his successful 2013 season. This year, he’s swinging more than in 2013 and, whiffing a lot more than in 2013 (especially against offspeed pitches). In part, that’s what you call “the book being out on someone,” but it’s also undoubtedly just a reflection of Lake’s game.

Can he adjust, and improve his contact rate? It’s undoubtedly possible, but it sure is hard to do at the big league level. Perhaps the huge leap in swing-and-miss against offspeed stuff is a sample size fluke, and/or something Lake can rectify, at least back to 2013 levels. If so, and if he can hit fastballs just a touch better, then maybe Lake returns to being a valuable player (especially if he can play better-than-average defense in center field, but that’s an entirely separate discussion). His BABIP will always be high, thanks to his bunting ability, his hard contact ability, and his speed. But, if these kinds of swing-and-miss issues persist, the BABIP will never be high enough to keep him a productive regular.

We always said about Lake that the physical talent was there to make him a big league ballplayer. Inconsistency at the plate – which is apparently manifesting itself in contact issues against better pitchers with better scouting reports – was the thing that threatened to hold him back. So far, it is.

This will remain something worth monitoring as the 2014 season goes on.