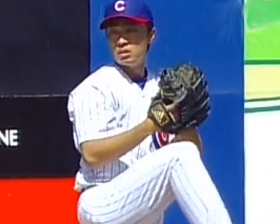 Yesterday Tsuyoshi Wada had his worst start of the season.

Now before you start burning your Wada jerseys (you do own a Wada jersey don’t you?), let’s set that bad start into context.

Over six innings Wada needed just 87 pitches. He allowed three runs (that’s not so bad) on six hits and two walks and only struck out one (ouch). And he allowed two home runs (double ouch) in one of the most pitcher friendly parks in the Pacific Coast League (if you’re prone to panicking, this would be the place to do it).

But, really, once you get past the word “worst,” Wada’s start wasn’t awful. Compared to the rest of his amazingly good campaign it was bad, but set into the context of fairly typical PCL pitching performances it doesn’t really stand out.

In fact, his worst start just goes to highlight how ridiculously good he has been this season. Even after yesterday he still has an ERA of 1.21 over 31.1 innings. Even for a rather veteran ‘prospect’, that’s impressive. If he can put up anything close to those results in Chicago when he is called up, the Cubs are going to be very happy indeed. His ERA could triple in the bigs and it would still be solid.

Iowa – It took eleven innings, but the Cubs won 5-4.
Tennessee – The Smokies scored all their runs in their final three innings and won 4-1.
Daytona – Cubs picked up a run in the seventh, but they needed more. The Cubs lost 5-1.
Kane County – Kane County took the early and often approach to scoring in this game, and it led to an 8-2 win.