Anthony Rizzo is Plenty Good and Other Bullets Skip to content 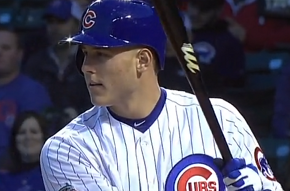 My non-Wrigley ballpark tour continues today, as I’ll be heading to Milwaukee to see the Brewers host the Yankees (Tanaka!) at Baseball Prospectus’s event at Miller Park. That’s going to have me departing relatively early in the day, so, although there should be plenty of content, I may not be around quite as much in the comments/Twitter/etc. later today.

I would wear that to my own wedding. RT @CarrieMuskat #Cubs Castro sporting new Villanueva t shirt pic.twitter.com/7ndVaebEDw