Kris Bryant is Southern League's Player of the Week, Awesome Skip to content 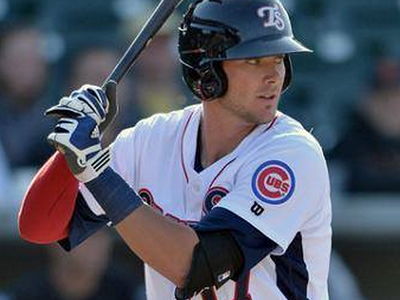 Chicago Cubs prospect Kris Bryant has been pretty productive in his professional career. After blowing away all offensive comers last year at San Diego, the Cubs made Bryant their first round draft pick (second overall), and he proceeded to whoop up on the Northwest League (short season Low-A) and the Florida State League (High-A).

Despite spending just 16 games (plus the playoffs) at High-A, the Cubs deemed Bryant ready for AA to start this year. And, yeah, he’s ready.

So far, Bryant sports a .331/.437/.624 line with the Tennessee Smokies, and just won the Southern League’s Player of the Week honors. His team has the deets on the win:

Mostly I just love that his outrageously good week – a week so good that it topped all other offensive players in the league – wasn’t that much better than how he’s been performing the whole rest of the year so far. He’s just been that good.

None of this surprises you, because you’ve known that Bryant has been killing the ball all year. A promotion to AAA is likely to come mid-year, with a big league debate to follow shortly thereafter (get him the big league experience heading into 2015? save the 40-man spot for the offseason? delay his service time accumulation until late April next year so that the Cubs get an extra year of control?).

Bryant’s got 43 Ks in 158 plate appearances (27.2%), which suggests there’s still something he could be working on. Obviously you don’t give a hoot about the strikeouts if a guy is producing like Bryant, but you do give a hoot if the K rate implies that better pitching (particularly more experienced pitching that can consistently command and locate breaking pitches) is going to exploit any serious holes in his swing. He’s a huge guy who’s always going to strike out at a healthy clip, but being above 25% at AA is something to monitor.

For me, I pretty much don’t yet have an opinion on what the Cubs should do with Bryant, vis a vis the big leagues. The K issues need to be monitored, and if the Cubs said it was a reason to slow-play him through AA and AAA, I could very much buy it – you don’t want a guy trying to work out those issues for the first time in the big leagues. And, as Javier Baez has showed us this year, it is conceivable that a guy can dominate at AA (but with tons of strikeouts), and then need some time to adjust to better pitching at AAA.

Having Bryant under control for an extra year is certainly no small thing (waiting for the Super Two deadline on Bryant (i.e., July-ish 2015) might not be realistic, fair, or necessary), and that militates strongly in favor of waiting to promote Bryant until late April 2015, at the earliest. On the other hand, if the Cubs believe promoting him to the big leagues in August/September this year will put him in the best position to succeed long-term, then obviously, you do it. Were the Cubs competitive this year, of course, this entire conversation probably looks a little different.

We don’t know what is specifically in the plans for Bryant, so we’ll have to wait and see. For now, AAA is the first next step on the horizon.