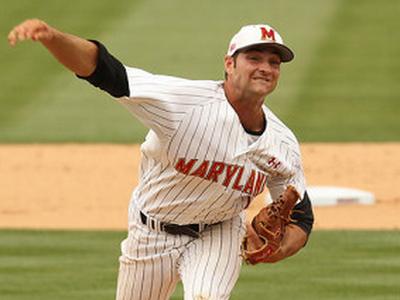 Not the guy plugged-in Chicago Cubs fans were expecting.

That’s neither a statement of derision about the Cubs’ second round selection, nor a credit to Cubs fan (a group, in this context, in which I’m including myself). The draft, perhaps more than any other event throughout the year, challenges our ability to admit to that which we do not know. Even the names that everyone knows, and who go at the top of the draft, are little more than a pundit’s opinion, and, if you’re really hardcore, some stats and a video or two.

So, when the Cubs took Jake Stinnett out of Maryland last night, I think it was fair to be surprised – after all, he’s a college senior, selected in the round after the Cubs took an ostensibly under slot guy – but I don’t think it would be fair to say it was a bad pick. That’s not only because, hey, what do we know?, but also because it actually looks like a pretty good pick. Setting aside everything about the overall draft strategy, and our expectations that the Cubs would immediately grab a top high school arm, I’m pretty stoked about Stinnett as the Cubs’ second round pick.

Consider that this is 6’4″, 22-year-old righty with upper-90s velocity, the possibility for three effective pitches (two-seamer, slider, changeup), an arm that hasn’t been dedicated solely to pitching for more than a couple years, and overwhelmingly good numbers this year. If he were a junior, we wouldn’t hesitate in saying that’s a guy we want.

When it comes to college seniors at the top of the draft, you pretty much have only two types that you can’t immediately discard as being about the dollars, rather than the talent: (1) previously-drafted juniors who held out for top dollar and didn’t get it (Mark Appel being the most visible recent example), or (2) players whose junior-year circumstances were fairly unique. For Stinnett, he mostly falls into that latter category, having focused primarily on pitching for the first time last year, and not logging a ton of innings. There wasn’t much for teams to go on, and so he was drafted in the 29th round by the Pirates, and rightfully did not sign for the kind of money guys in that range, who aren’t big over slot types, get.

His senior year, Stinnett’s velocity ticked up, his performances became dominant, and he landed squarely on the radar as probably the top college senior in the draft. I have a hunch that the Cubs really hoped to get Stinnett in this draft, regardless of any bonus pool-related considerations.

Some more on the pick …

Originally a two-way player who played third base for the Terrapins, Stinnett started focusing on pitching only as a junior in 2013. He’s really taken off this season, showing a jump in velocity up into the mid 90s with plenty of sink. His slider has greatly improved, flashing as a plus pitch. His changeup is behind the other two, but he has shown some feel for it. The focus on pitching has helped his command, and he’s able to pitch to both sides of the plate.

Stinnett’s stuff has continued to trend upward this spring, as he threw a no-hitter in February, dominated a head-to-head matchup in March with Carlos Rodon and North Carolina State, and has reached 97 mph with his fastball, which usually sits 92-95 with above-average life. He gets extension in his delivery and has a pitcher’s frame at 6-foot-4, 215 pounds. His hard 78-83 mph slider is his preferred second pitch, with a too-firm, little-used changeup also in his repertoire. Stinnett is a senior but also a legitimate top-three rounds talent with something left in the tank due to his relative inexperience as a pitcher.

Rodon’s nemesis on Friday night – other than his control and command – was Maryland right-hander Jake Stinnett. Stinnett dominated in front of a large contingent of scouts and executives, allowing five baserunners and striking out fourteen in eight innings of work. Stinnett’s fastball sat 91-94 with arm-side whip and is an above average offering. He commanded it to both sides of the plate, spotting it on the outside corner – or just off of it – and running it inside on righties for wings and misses. He complimented it with a vertically oriented slider in the 80-84 mph range. He displayed dictatorial control of the breaking ball as well, consistently throwing it just off the plate away from righties and backdooring and back-footing it to lefties. It’s a solid average pitch but played up thanks to Stinnett’s impressive control of it.

Jake Stinnett is an outstanding pick in the 2nd. Fastball command to both sides, Great breaking ball. Big Fan