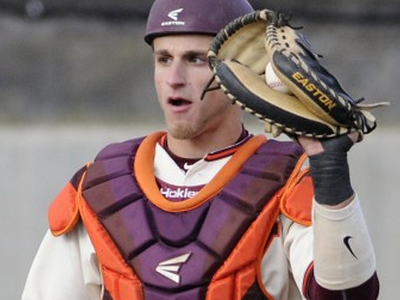 To underscore how little we actually know when it comes to the amateur draft, straw poll: if you were being honest, and reviewing the Cubs’ top ten picks, how many of you would have pegged third rounder Mark Zagunis, a junior catcher out of Virginia Tech, to be the first to reportedly sign? And, given that he had a slow start to his season, which may have pushed him down the boards a bit, even though he finished very strong, how many of you would have pegged that he would sign for under slot?

Chris Cotillo tends to nail this kind of stuff, so I imagine he’s on to something here:

Zagunis at $100,000 under slot is a very nice savings in the third round, especially for a guy who appeared to be a fairly reasonable pick in that area of the draft.

I dig the athleticism that will allow him to play elsewhere if the catching thing doesn’t work out (but the same athleticism should help him maximize his ability behind the plate), and I dig the apparent plate discipline ability, as well as the obvious hit tool. The only thing Zagunis doesn’t appear to bring to the table is a ton of power, but, you’ll forgive that because of his speed and plate approach (and, in theory, his playing a premium defensive position). And I should also point out: it looks like he showed more power in his sophomore and freshman seasons, so it could have just been the slow start this year holding him back.

In the end, though, the Hokies found his bat to be so important to their lineup that, on days when he wasn’t catching, Zagunis was playing in the outfield or DH’ing. He started every game for them this year.

A few short videos of Zagunis, including MLB.com’s package:

Showing off the speed:

And, most importantly, showing off plus bat flip (with some development time, it looks like he’s got the raw ability to get to plus-plus):