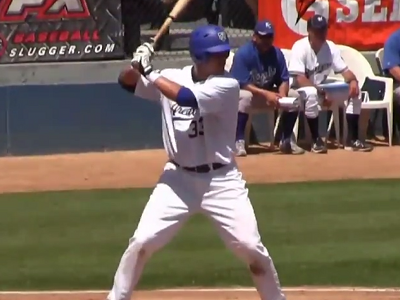 One of the more interesting selections the Chicago Cubs made this weekend in the 2014 MLB Draft was Boise State freshman Joe Martarano.

The 22nd round selection is known for his size, power, and physical style. You know, on the football field.

That’s because Martarano is Boise State football player. But, unlike other draft picks involving football players this year that were made for less than honorable purposes, the Cubs actually want to see about getting Martarano to play some baseball. And from the sound of things, they’ve got a pretty good shot to make it happen.

“The ideal situation would be the Cubs take him and get [to play] with the [Boise] Hawks,” Victor Martarano, Joe’s father, told the Idaho Statesman last week, before the draft. “We’re crossing our fingers for that deal.”

The Cubs, as you know, have their short-season Low-A affiliate there in Boise, which would be among the levels a guy like Martarano could play coming out of the draft.

From the quotes in this Idaho Statesman piece on the selection, and the overall tenor of the article, it sounds like that’s possibly already in the works. Not only is the geographic placement ideal for Martarano, but a recent coaching change at Boise State helps, too: current BSU football coach Bryan Harsin indicated that they’re open to letting Martarano play baseball this Summer before returning to the gridiron this Fall. That’s something previous coach Chris Petersen would not allow, and a big part of the reason Martarano turned down $100,000 from the Phillies last year when he was drafted in the 13th round.

Before that draft, Martarano, who turns 20 next month, was a highly-ranked third base prospect – BA had him 147th overall in the draft class in May of last year, and the fifth best overall high school third base prospect. But his strong commitment to BSU to play football, where he’s a linebacker, led him to slide in the draft. And when it came time to sign or go play football, Martarano opted for football.

He redshirted last year, and figures to see some playing time this year for the Broncos.Before that, though, it looks like there’s a perfect situation for him to play a little baseball.

Here’s how VP of Scouting and Player Development Jason McLeod put it to Sahadev Sharma (ESPN):

“We’re going to make a good run at him. It’s a different situation there in that they don’t have baseball at that school, but he is a guy that was well-known on the amateur circuit in high school because he’s so strong, physical, right-handed power. That one actually is one that we’re going to try. It might be a situation where he plays football still and goes down and plays baseball in the summer.”

So, based on that comment, and the comments from various interested parties in the Statesman article, it looks a pretty fair bet that Martarano will sign, and will play for the AZL Cubs and the Boise Hawks this Summer at some point.

It’ll be very interesting to see how Martarano adjusts after essentially taking a year off from baseball. He’s obviously still in excellent physical condition (and 6’4″ 235lbs to boot), but you’d expect an adjustment process. There’s no reason not to bet on the physical ability, though.

Get Martarano in the system, the Cubs are likely thinking, and see what happens. If football doesn’t wind up working out, or if he finds that he’s got a real future in baseball, then the Cubs just put themselves in position for an excellent late-round win.

As for signing, it’ll also be interesting to see what kind of bonus Martarano commands. On the one hand, there are reasons he could be a tough sign – in particular, there’s the commitment to football, and there’s the fact that he was a top 150 talent last year (if picked in that range, his bonus expectation would be pretty high, based on the slots in that area of the draft). On the other hand, this is a situation where he gets to play baseball where he’s living right now anyway, and gets to keep playing football if he wants. Not too many other organizations could offer him that setup. It seems unlikely that the Cubs would have to go too far beyond the $100,000 limit for draftees after Round 10 (any amount you spend on a guy over $100,000 after Round 10 counts against your bonus pool), but we’ll see if and when he actually signs.

A short video of Martarano, who shows off his smooth swing (especially for a high schooler – the swing-and-miss is understandable), but maybe needs a little work at third: