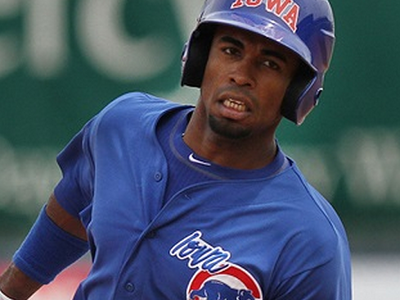 Arismendy Alcantara stands at 5’10”, 170 lbs. We all know he’s got pop for his size, but you don’t necessarily expect to see him do this:

As the announcer rightly points out, the right fielder didn’t even flinch on that one, and then the announcer expresses his shock that the ball hit the light standard. It was absolutely destroyed.

That reminds me: Arismendy Alcantara is really, really good.

It happened a lot last year, and it’s happening again this year (I’m totally guilty of it myself): with all of the attention heaped on the Big Four (Kris Bryant, Javier Baez, Jorge Soler, and Albert Almora), as well as top pick this year Kyle Schwarber, Alcantara gets the short end of the attention stick. That’s a mistake.

There really shouldn’t be a Big Four right now. There is a Sexy Six.

As for Alcantara, we’re talking about a 22-year-old player at AAA who is capable of playing shortstop, second base and center field, and is capable of doing that video there. That’s a clear top 50 prospect, folks.

Long story short: Alcantara is a top Cubs prospect, he’s having a fantastic year, he’s scoring hot over the last month, and he’s improving the most important aspects of his game.

Already on the 40-man roster, there’s a chance Alcantara could be up in August or September of this year, depending on how the roster shuffles and how his development progresses.