Cubs Minor League Daily: All About The Food Skip to content 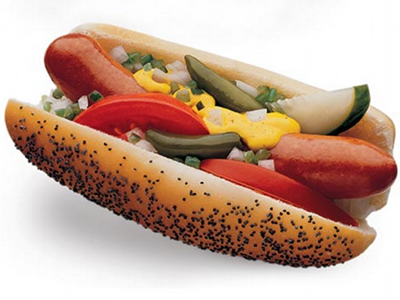 There are a lot of great things about minor league baseball. There is the baseball itself, of course, and the low cost, and the high level of interaction between fans and players, and strange events that take place between innings, and let’s not forget the often amazing uniforms that appear in the minors.

And then there is the food. Minor league ballpark food is so varied and fascinating that it could be the subject of a book; it is already the subject of an annual contest run by MiLB.com. That’s right, it’s time for the Food Fight.

There are so many awesome items on this list I’m not sure where to begin. How about the Pulled Pork Parfait featuring pulled pork, mashed potatoes, and gravy from Lansing? That bit of tastiness looks almost normal compared to some other options.

If you’re in El Paso, you could try the Memphis Meets Mexico Juarez Dog. This bacon wrapped hot dog is not only topped with more bacon, but some fried pork skins for good measure (along with a bunch of other stuff).

The Great Lakes Loons of the Midwest League have managed to replace bread. Their Pig Mac is basically a pulled pork sandwich with deep fried macaroni and cheese standing in for the bun.

Not cheesy enough for you? Then head to Wisconsin where the Timber Rattlers have built the On Wisconsin burger. They top their hamburger with split bratwurst, nacho cheese, and fried cheese curds. That’s right, the cheese curds are on the sandwich, not served along side. Sign me up.

Northwest Arkansas reinvents the burger patty itself by building it from a 50/50 blend of ground beef and ground bacon. Naturally, they top it with more bacon. The name of this delicacy is, of course, the Texas League Squealer.

The Cubs’ own Boise Hawks make the menu this year with the Idaho Cheesesteak. At first glance this looks like a fairly normal cheesesteak. But normal food isn’t exactly a thing in the minors, so the Hawks Idaho this item up by adding hash browns on the sandwich.

Iowa makes the list as well with the best looking version of barbecued nachos on the list. Remarkably, these Pulled Pork Frito Nachos are not the same barbecued nachos I tried when I was in Iowa. That settles it, folks. I tried the wrong barbecued nachos. I have to go back.

And one of these days I’ll have to make it over to Kane County for the Colossus Burger. The Cougars take a fairly normal cheeseburger on a pretzel bun and jazz it up with pulled pork and coleslaw.

But before I make back to the Midwest I might be able to sneak over to Frederick, Maryland for a game. There the Frederick Keys have piled a hot dog with crab macaroni and cheese and candied bacon. I’ve lived in Maryland long enough that this sounds normal (seriously, people around here put crab on everything), but it is still bizarre enough to be a quality entry on the ballot.

And I’m just scratching the surface. Deep fried moon pies, ice cream topped with dippin’ dots, PB&J on a toasted donut, a hot dog grilled inside a quesadilla, a Missoula favorite that goes by the name “Bats and Balls”, the list goes on and on. If you can imagine it, a minor league team somewhere has probably topped it with bacon, put it on a bun (or something vaguely bun-like) and served it to hungry fans.

And that is just part of what minor league baseball so much fun.

Iowa –
Friday – Iowa had all the runs they would need by the end of the third inning, but they were just getting started. They won by a final score of 16-3.
Saturday – The day after scoring sixteen runs the Cubs were shutout 6-0. That’s baseball.
Sunday – Sunday saw another shutout, but this time the Cubs won 2-0.

Daytona –
Friday – The resurgent Cubs opened the weekend with a 1-0 win.
Saturday – On Saturday they held off a late Lakeland rally to win 8-7.
Sunday – It not only took eleven innings, it took a four run outburst in the eleventh, but the Daytona Cubs won again, 9-8.

Kane County –
Friday – Kane County scored in the tenth for this 3-1 road win.
Saturday – The Cougars moved to twenty five games over .500 on the season with this 10-2 win.
Sunday – Two in the top of the ninth secured this 9-7 win.

Boise Hawks –
Friday – Back at home, Boise busted out the bats to beat Hillsboro 11-1.
Saturday – Saturday’s game went to the road team, though, as the Hawks lost 3-1.
Sunday – A big second inning carried the Hawks to this 6-2 win.

Arizona Cubs –
Friday – A run in the ninth sent Arizona to this 6-5 loss.
Saturday – A huge fourth inning for the A’s resulted in a 7-5 Cubs loss.
Sunday – The Cubs scored in the bottom of the ninth to walk off with a 5-4 win.