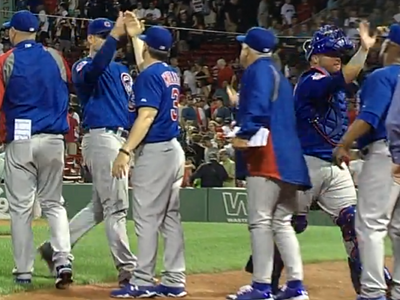 Immediately after the Cubs dispatched the Red Sox last night with a 16-9 thumping, I remarked in the EBS that, “I don’t know if it’s an exaggeration to suggest that this game, at the close of a sweep at home, will be the moment Red Sox fans look back on as the day the 2014 season ended for them, and the Red Sox decided they’d be better off as sellers.”

Well, judging by the reaction at Over the Monster, it would indeed not be an exaggeration:

But the Red Sox were just swept by the Cubs. We can’t shrug off a four-game deficit against the Yankees because the Yankees are vulnerable when the Cubs are taking three in Fenway Park. And seven against the Orioles? Eight against the Jays? Forget about it.

Let’s call tonight what it was. This was the death rattle of the 2014 season in its full brutal glory. Sixteen runs to the Cubs, three games in Fenway Park, July 31st four weeks away. When the Red Sox needed to rise, or at least to tread water, they sank to the furthest possible depths. Talking about “shaking things up,” “going on a run,” or really making any move with real consideration to its impact on the 2014 standings just rings at best false, at worst delusional and desperate.

For all intents and purposes, tonight was the last night of 2014, and tomorrow is the 2015 preseason.

Setting aside the implicit insult of the Cubs – “Swept by the mighty Cardinals would be one thing, but the Cubs? The Cubs?” – I actually think this is one of those rare times when a dramatic reaction is also an appropriate one. The 2014 Red Sox are toast, and the Cubs added the final crisp.

In so doing, did the Cubs screw themselves?

Sure, I know the arguments: (1) a potential (prospect-rich) buyer just went off the market; (2) another seller with some similar assets just came on the market; (3) if the Red Sox now trade Jon Lester, he won’t be subject to draft pick compensation, which could have helped a team like the Cubs if they get a protected first round pick; and (4) if the Cubs aren’t going to be a contender, then wins right now actually hurt them in the long run. All reasonable.

Then again, I’ve got responses: (1) I’m not so sure the Red Sox were going to buy (at least not what the Cubs were selling) anyway, as they were already way, way behind the 8-ball coming into this series; (2) the assets you could see the Red Sox sell might not compete all that much with the Cubs’ pieces, as Lester is a higher-tier, far-more-expensive rental than Jason Hammel (and probably has to go outside the AL East), and Jake Peavy is probably a tier below (and, as for complementary positional or bullpen pieces, the market is always going to have a ton of them come late-July); (3) it’s just so speculative right now to say that the Cubs are so likely to be in on then-31-year-old Jon Lester that you hope he’s tied to draft pick compensation (and hope the Cubs have one of the worst 10 records); and (4) with a sell-off looming and plenty of losses ahead, it’s hard to get too wrapped up, in early July, about the day-to-day wins and losses.

Were I judging that series sweep based solely on those four points and counter points, I might be inclined to say it wasn’t clearly a good thing or a bad thing.

… but that’s crazy, right? The Cubs just swept the defending World Champions in their house. They did it in July of a down year, largely on the backs of guys who will be with the team next year. Having this kind of showing is unequivocally a good thing because it demonstrates, for a brief moment of time, what this team can be as soon as next year – and that’s before we even talk about savvy offseason additions and 2015 prospect call-ups.

In sports fandom (and writing), I think we’re often too quick to divine narratives from small samples and lucky bounces. People like stories. And people don’t like to wait for enough data to pile up to justify the story (which, by that point, is rarely black and white, but an unsatisfying morass of gray).

In that regard, I’m loathe to suggest that 3 games out of 162, two of which the Cubs barely won, can tell us anything about what’s to come 12 months from now. I won’t then, give you the satisfying narrative parallel of this series sweep representing both the moment the Red Sox knew their 2014 season was over and the moment the Cubs knew they would be better than everyone thought in 2015.

But I’ll give you some hopeful gray: seeing what this team has done, particularly with pieces that will be in play next year, and particularly in a series like this, has me dreaming on 2015 in a way I wasn’t even just a few weeks ago. Since mid-2013, when it started to look like 2014 was not going to be a corner-turning season, I’ve wanted to believe that 2015 could be the year, even as voices from all corners shouted, “Nope, it’s 2016!” or “Good luck doing anything until 2019!”

Throw in the development of upper level, impact prospects and a pile of available cash for next year should the Cubs want to use it? The want starts to become a maybe.

For a day, at least, I feel as good about the Cubs’ chances in 2015 as I have in years. No, I’m not going to argue that they’ll be a clear playoff team, and, no, I’m not laying out any way-too-early expectations. I’m just saying that, as I survey the Cubs’ situation and how they’ve played this year, and I watch a team as good as the Red Sox were supposed to be fade into the background, I can’t help but remember how delightfully unpredictable baseball can be. All you can do is put your organization in a position to have a chance.

Doesn’t it feel like the Cubs could be in that position in April 2015?