This Week In The Minors: Trade Thoughts Skip to content 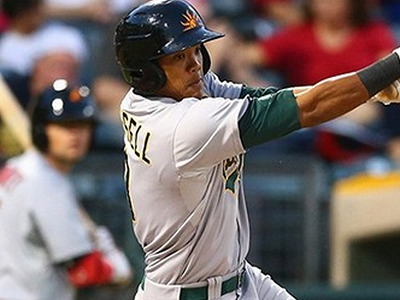 On June 10th I wrote an article that extrapolated trends from the Cubs recent drafts into a generalized picture of how the Cubs appeared to be building the organization.

If I had I read my own article, I might have predicted that the logical conclusion of such thinking is that the Cubs would look to acquire someone like Addison Russell in a trade. But, being rational, I figured that there was no chance the Cubs would ever have that opportunity. The Top Five prospects in baseball just don’t get traded, and especially when they are shortstops.

Except Russell did. To the Cubs.

More on that in a bit.

Despite a three game losing streak, Iowa holds a one game lead for first place in the Pacific Coast League Northern Division thanks in large part to their division leading home record of 29-19.

It will be awhile before the Cubs return home, though. They conclude a road trip at second place Oklahoma City today, and then travel to Omaha for a four game set. They won’t be back in Des Moines until Friday to start a series with Oklahoma City.

The Smokies are also slumping through a three game losing streak, but unlike Iowa that streak has left the Smokies in second place, half a game back of first.

That first place team is Birmingham, though, and Tennessee is playing in Birmingham through Tuesday. With reinforcements arriving, a turn to a winning streak certainly isn’t out of the question. That is doubly so late in the week when the Smokies return home to face Jacksonville.

Daytona continues to play much better baseball in the second half as the offensive resurgences from Albert Almora and Dan Vogelbach remain intact. Currently that better play has the Cubs in third place, just a game and a half back of Brevard County.

Roadtrips bookend the Cubs week, first to Lakeland and then to Jupiter, and in the middle they have a three game set against Dunedin. Weather permitting of course. We are getting into the time of year when rain is an even more constant threat in the Florida State League.

The Peoria Chiefs are trying to keep pace with the Cougars, but Kane County is not making it easy. The Cubs affiliate still has the best record in the league and a one and a half game lead over the future Cardinals. The Cougars are also a perfect 5-0 on the road in the second half.

They put that road record on the line four times this week, first against Clinton today, and then at Quad Cities Tuesday through Thursday.

That Quad Cities trip is significant in that those games will be on MiLB.TV. If you are a subscriber, this week offers a rare chance to see a very talented and very good Low A team in action.

That awful early road trip dropped the Hawks in a hole, but they have been steadily working out of it. They are now just one games under .500 on the year, three under .500 on the road, and only three back of first place Hillsboro. Unfortunately time is already running out on the first half the season.

After they wrap up with Eugene at home today, the Hawks welcome first place Hillsboro to Boise. Adding to the opportunity for Boise, including today’s game the Hawks are at home for twelve of their next fifteen.

The Cubs have won four in a row now and hold a one and a half game lead over the AZL Diamondbacks in the East Division. Only the Rangers have a better overall record than the Cubs.

This week the Cubs come home for games against the Indians, Diamondbacks, and Mariners, but first they have to visit those league leading Rangers. That clash of the Rookie League titans is today.

Baseball is a game of failure.

A great hitter fails in two thirds of his trips to the plate. A great pitcher fails to keep the opposing team from scoring in nearly every game he pitches. Most seasons the very best teams lose nearly one game in three, often more. And that holds for prospects as well. Even the very best and brightest talents have a tendency to never make an impact in the major league. Fans know it. The media knows. The players know.

Even the front office folks know it, though many articles and comments are often written under the assumption that they do not.

There are many strategies that teams, including the Cubs, have put into place to deal with this, but the one that stands out today is that of bulking up on as much elite talent as possible. If some prospects fail, then the more good prospects a team has the better their odds of getting a few that will succeed. Good teams, it follows, will continue to add talent to their farm system even when they appear to already have one of the best in baseball.

And a really good front office will continue to do so in a manner that results in the assembly of a potentially historic collection of talent. Whether you agree or disagree with the approach the Cubs front office has taken to the rebuilding, there is no arguing with the results so far. By adding Addison Russell to Kris Bryant, Javier Baez, Jorge Soler, and Arismendy Alcantara, the Cubs have assembled one of the most ridiculously good collections of hitters ever to hit the high minors for the same team.

Yes, I know Albert Almora and Kyle Schwarber are very good, but they are not in Double A. They are not yet in the high minors. While they deserve a great deal of credit for their performances thus far and for their projected futures, those futures are further out. The immediate future, the one that dawns in the second half of this season and will continue to appear as 2015 unfolds, is the future that is in Iowa and Tennessee right now.

And that may be the ultimate lesson of the July 4 trade. Rather bulk up on a lot of prospects in another ‘restock the farm’ type trade, the Cubs went for the most elite, close to the majors talent they could land. Trading for Russell was not the move of a team that expects to remain out of contention for another three years. Trading for Russell was the move of a team that is expecting to load up with young talent in 2015 and see just how far it can take them. The Cubs have a nearly unprecedented wave of young talent due to arrive over the next twelve months or so, and they have a mountain of payroll space to use this winter in support of that wave of talent. It is almost time.

Prospects, even elite prospects, sometimes fail. But just one elite prospects can change the course of a franchise, and the Cubs have assembled a lot of them. So many, in fact, that the odds are very good they will not all fail. Some, likely more than one, will succeed and succeed in a big way.

And at the major league level it all starts in 2015.