Cubs Minor League Daily: The Other Prospect Skip to content 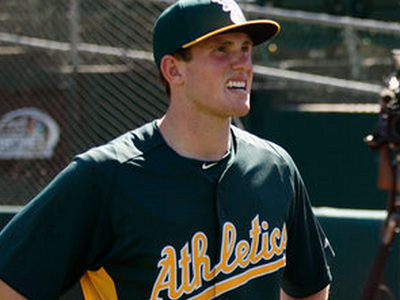 Addison Russell is drawing most of attention in the epic Cubs-Oakland trade, and rightfully so. He ranks not only near the top of the Cubs farm system, but near the top of prospect lists in all of baseball.

But he was not the only prospect coming over in that trade. Billy McKinney also came to the Cubs and he made his debut in the Daytona doubleheader yesterday. He singled in both games and finished with no walks and no strikeouts.

McKinney, who does not turn 20 until late August, immediately becomes one of the better left handed bats in the Cubs organization. He does not have the pure power of Schwarber or Vogelbach, although he should have sufficient power to play in any outfield position on most teams, and is likely to pair that power with a fairly high batting average. He is not a very high strikeout guy and has already shown a willingness to earn a walk. His pre-trade walk rate with Oakland, for example, was a robust 10.8% this season.

Defensively he’s likely good enough to play average defense in center. That may not cut it in a Cubs system that features plus defenders like Almora and Hannemann, though, so I suspect he’ll slide over to left long term. His combination of bat and defense should be enough to keep him near the backend of many Top 100 prospect lists this winter and could easily set him up for a breakout when he hits Double A next year.

Iowa – The Cubs fell behind early and never recovered in this 7-3 loss.
Tennessee – The Smokies got one in the ninth on their way to a 7-1 loss.
Daytona – Daytona took the first game of the doubleheader in extras 4-3, then jumped to an early lead on their way to the sweep with a 6-1 win in the finale.
Kane County – The Cougars had yesterday off.
Boise Hawks – Boise was also off on Monday.
Arizona – The Cubs surrendered eight in the eighth to lose 11-2.