So, About that PTBNL in the Samardzija/Hammel Trade Skip to content 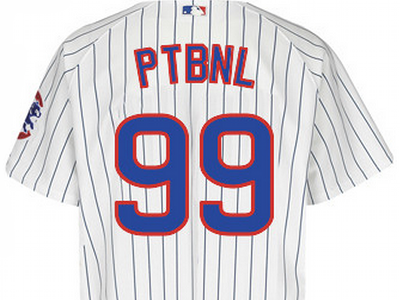 By rule, a PTBNL has to be identified within 6 months of a trade going down, which would give the Cubs well into the offseason to make a decision (Mark Gonzales says the decision is not expected until November). Why the wait? Well, typically, teams agree on a list of players (usually lesser prospects) that would theoretically be acceptable in rounding out a trade, but on which the receiving team isn’t quite yet ready to decide – but neither side wants to hold up the rest of the trade. So, it’s possible that the timing element here is very simple: the Cubs have a list of players from which they can choose, and they might prefer to wait a while to decide, so that they can get as much information as possible.*

Further, by waiting until the offseason to make a selection, the Cubs may be in a better position to choose whether or not to select a guy who is otherwise Rule 5 eligible (and thus know whether the guy is worth putting on the 40-man roster immediately).**

*(For example, one rumored name is pitching prospect Raul Alcantara, who underwent Tommy John surgery earlier this year. By deferring the decision on the PTBNL, the Cubs could get more information on how well Alcantara is rehabbing before selecting him. That is just an example.)

**(To lean heavily on Alcantara as an example, he’s a guy who is Rule 5 eligible this year. While it’s unlikely that he’d be far enough along in his recovery that a team in late November/early December could project that he’d stick on the 25-man all season in 2015, it’s possible. (Correction: As pointed out in the comments, Alcantara is not Rule 5 eligible … because he’s already on the A’s 40-man. Otherwise, he would have been eligible, and the point still stands. Just a bad player example for the Rule 5 aspect. Alcantara remains a good example for the crux of the issue: having to use a 40-man spot.))

Aside from the timing, what you really want to know is whether the Cubs will be getting a legit prospect from the A’s. Having most recently seen the Cubs get Neil Ramirez as a PTBNL, your hopes are probably a touch higher than they should be. Recall, Ramirez wasn’t quite your typical PTBNL – he was the guy the Cubs always wanted. The Cubs just wanted a little more time to see whether his shoulder issue would wind up being more serious than it appeared at the time (it didn’t).

This week, Cubs GM Jed Hoyer said in a radio interview on the Score that he didn’t see the PTBNL changing the balance of the deal, which may or may not tell us what we want to know. Even in my most optimistic scenario for what the Cubs could get as the PTBNL (someone like Alcantara, for example), I don’t think that “changes the balance of the deal.” A lottery ticket tacked on to the end of the deal doesn’t really impact the value of an elite (elite elite) prospect like Addison Russell, a borderline top 100 prospect like Billy McKinney, and a 25-year-old former big league starter like Dan Straily. They are the main components of the deal, regardless of the PTBNL.

What we’re really looking to know, though, is whether the PTBNL is even going to be a guy we can dream on. For his part, Nick Cafardo reports that the PTBNL “will be significant.” I think you have to put that phrase into context, and understand that Cafardo likely doesn’t mean significant in the way that the first three pieces in the deal are significant. Instead, I read that as “someone worth noting.” Once again, I think that’s really all you can hope for. Even without the PTBNL, the deal looks like a plenty solid return for the Cubs.

It’s worth pointing out that the Cubs could merely wind up with cash in place of the PTBNL. It depends on the list of players involved, how they perform, how the Cubs are choosing, etc. If that ends up happening, as Hoyer put it, the lack of an additional player doesn’t change the balance of the deal for me.

One final thought, for now, on the PTBNL: is it possible that the Cubs and A’s have agreed to two or more alternative lists of players, from which the Cubs will get to choose depending on the performance of Jason Hammel and Jeff Samardzija this year? No, it wouldn’t be tied to explicit performance statistics like ERA or wins or whatever. But it might be possible that the list of players could be tied to things like how many starts the A’s get from Samardzija and Hammel, and whether each misses time with injury. I say it “might be possible” in a theoretical sense, only, as I have not been able to confirm whether teams are permitted to structure deals in this way. It would certainly seem a nice way to build in a hedge – a minor one – for each team in a deal like this.