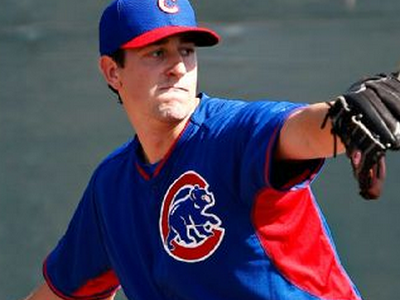 The Cubs’ organizational pitcher of the year from 2013 will make his big league debut today in Cincinnati, and is among the Cubs’ best pitching prospects. On the year, Hendricks, 24, sports a 3.59 ERA and 3.14 FIP at AAA Iowa over 102.2 innings. He’s struck out 97 and walked 23 (4 intentional).

Although he doesn’t have overpowering stuff, Hendricks has done nothing but succeed at every level of the minors with a wide mix of pitches and impeccable command and control. Like some of the others who’ve come before him, Hendricks will have to hit his spots to have success, but he’s got a touch more velocity than Tsuyoshi Wada and Dallas Beeler, which helps you at the margins. Hendricks is also a very cerebral dude, which could help him succeed in ways that are difficult to see or quantify.

Speaking of which, Hendricks notes to Cubs.com that he’s been working on his four-seam fastball (i.e., the one that tends to have a little more velocity and a little less movement) this year, which explains those reports about an uptick in velocity.

“I usually throw mostly two-seams, but with [Iowa pitching coach Bruce Walton] down there, I’ve been focusing on my four seams to throw with more velocity to guys and it keeps them even more off balance on both sides of the plate,” Hendricks said. “It’s been a real key for me this year and I’m going to stick with it.”

Hendricks throws the four-seamer and two-seamer, as well as a curveball and a changeup. The latter three are believed to be MLB average or better, and he’s believed to be able to command them well. If the four-seamer is also up to par, and reaches the 93/94 range, as reports have suggested, then you’re looking at a guy who could develop into a middle-of-the-rotation type. Most would say that’s not the likeliest outcome, but we’ll see how his stuff plays at the big league level.

In any case, of all the internal AAA options the Cubs have for a rotation spot next year, Hendricks is probably your early favorite to win a back-end spot (though hopefully the Cubs will be so deep by that point that it’s a spirited competition among the AAA guys, rotation holdovers, new acquisitions, and possible converts like Neil Ramirez and Justin Grimm).

I’m getting ahead of myself. The point for today: what’s the velocity look like, do all of his pitchers look big-league-caliber, is he hitting his spots, and is he missing bats?