Reports: Chris Valaika is Coming Up to the Chicago Cubs Skip to content 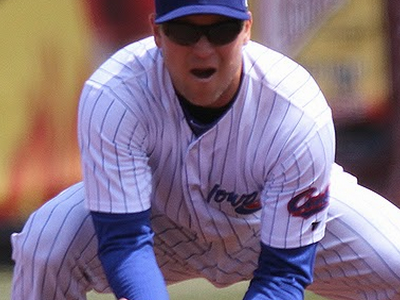 According to multiple reports (example here), AAA Iowa utility man Chris Valaika is going to be the player getting the call to come up and replace Cubs utility man Emilio Bonifacio. Adding some credence to the reports, Valaika did not play yesterday.

We’ll have a little more if/when this is announced as official, but the early take is that this is something of a surprise, and doesn’t bode well for the future of similar player Logan Watkins, who is already on the 40-man roster. Valaika is not, so he’ll have to be added, taking one of the spots vacated by the move yesterday. Valaika, 28, has had a few stops in the big leagues over the years with Cincinnati and Miami, and is hitting .278/.344/.423 for the I-Cubs this year, with a 7.8% BB rate and a 19.1% K rate.

Valaika can play, and has played this year, all over the diamond, so that’s where his value comes from. The Cubs wouldn’t be calling him up at this point in the year unless they were at least holding open the possibility that he could be a bench player for the team next year. In this way, he’ll get something of an extended audition (unless a bench-needy contender were to gobble him up in an August waiver deal, which seems unlikely, but not impossible).

I guess we’ll see what he can do. Can’t hurt to give him a look.

As for the other open spot, you can expect that it will be taken by a reliever, and Kyuji Fujikawa – coming back from TJS – seems like the best bet.

Picture via the inimitable Dylan Heuer