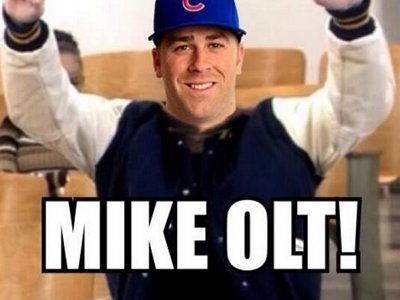 Although it wasn’t quite a 12th inning game winner in your Major League debut, each of Jorge Soler and Mike Olt went deep yesterday for AAA Iowa, and they merit a look.

Hang onto that ball, kid.

I really enjoy watching Soler at the plate, as he’s got a very mature approach … but can still unload on the ball when it’s where he wants it. That homer came as part of a three-hit (including a double and that homer) performance. Waiting for Soler to have a slump that lasts more than one day.

Olt’s homer was of the grand slam variety, and it was an absolute bomb:

Apologies if you can barely see the moment of impact. Kris Bryant was on second base, and he is an enormous man.

Olt continues to kill the ball at AAA, which is good, but his 18:2 K/BB ratio is disconcerting, given the struggles that led to his demotion. We know that Olt can crush the ball when he hits it. What we don’t know is if he’ll ever hit it enough against advanced pitching to be a big league bench bat, let alone a regular. Presumably, Olt will be back up in September, and may see some starts at that point.