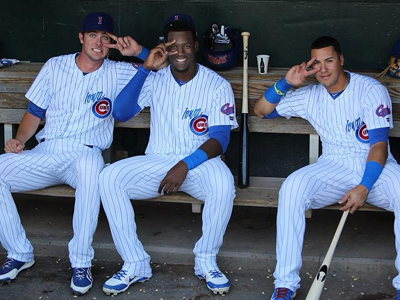 Although Kris Bryant won’t arrive until next year, the Chicago Cubs are on the verge of featuring three players, under 23, each of whom has theoretical MVP-caliber upside. Will all of Bryant, Baez, and Soler achieve that upside? It’s extraordinarily unlikely. But the possibility – especially when paired with Anthony Rizzo, Starlin Castro, Arismendy Alcantara, and a stockpile of excellent prospects to follow thereafter – is so exciting it should be illegal.

When asked just how good the Bryant/Baez/Soler trio could be together in the big leagues, Soler said it best, per Cubs.com:

“It’ll probably be a little dangerous.”

“You understand they got a plan for us,

I bet you didn’t know that I was dangerous.

It must be fate, I found a place for us.

I bet you didn’t know someone could love you this much.”