Officially Official: MIKE OLT! is Back Skip to content 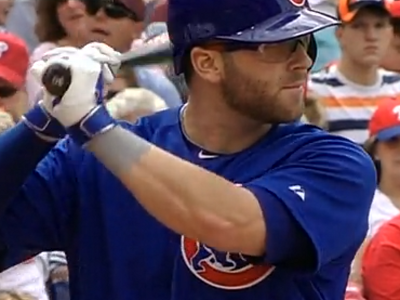 I won’t belabor his past issues. Suffice it to say for today’s purposes only that he battled significant pitch recognition and contact issues after making the Cubs out of Spring Training this year, was sent down to AAA Iowa where he reworked his swing mechanics, crushed the ball, hurt his hamstring, and then helped the Kane County Cougars win their first playoff series.

Olt is officially back with the Cubs now, where he’ll likely make a lot of starts at first base the rest of the way, or at least until Anthony Rizzo returns. He isn’t starting today, but he’s available off of the bench.

I’d caution against setting expectations too high for his final few weeks of the season, and against taking away too much from the results, whichever direction they go. Instead, I just want to see what that swing looks like, and see that he isn’t constantly down 0-2 in every at bat.

For all of the contact woes, the talent is still there. Olt has huge power, takes a lot of walks, and plays great defense. Whatever the plan might be for him next year, Olt making strides can only help the Cubs.

And Olt earned this:

Interested to see what Mike Olt does with this chance in Chicago. Worked his butt off in Des Moines and really took advantage of the time.