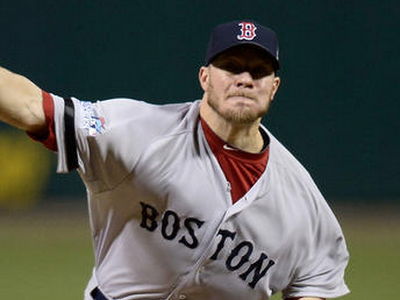 There’s a pretty clear top tier of free agent starting pitchers this offseason, made up of Jon Lester, James Shields, and Max Scherzer. Cole Hamels is also available via trade, and Kenta Maeda, if he’s posted, could be viewed by some teams as being as attractive, overall, as any of those starters.

The Chicago Cubs are in the market for an impact starting pitcher, and Theo Epstein has said that, in an ideal world, the Cubs would pick up one guy like this offseason, as well as a second very solid starter. You can bet that the pool of impact starters from which the Cubs will realistically be shopping is that group up there, which is a relatively limited (sizable for impact starters, though) set.

The next tier of quality, reliable starters, however, is pretty huge this year, which makes narrowing down the Cubs’ preferred target(s) a little trickier. Among the names that are available in that group: Brandon McCarthy, Jason Hammel, Justin Masterson, Francisco Liriano, Ervin Santana, Kyle Kendrick. Dan Haren and Yovani Gallardo are potentially going to become available via options decisions. There are also riskier, high upside guys potentially available like Brett Anderson and Chad Billingsley.

Long story short: it’s a large group of intriguing options, and we didn’t even get into second tier types who could be available in trade.

And I also didn’t mention one of the tougher guys to peg in terms of value: Jake Peavy.

Peavy, 33, is coming off of his worst season, in total, perhaps since he was just breaking in over a decade ago with the Padres. Between Boston and San Francisco, Peavy posted a 3.73 ERA, which isn’t bad, but he also had a 4.11 FIP and a 4.18 xFIP over his 202.2 innings. More importantly, his 18.5% strikeout rate was not only below league average, it was the lowest mark of his career. His 7.4% walk rate was his worst in five years. When you see dips like that in tandem, it’s a scary thing, especially as a pitcher ages (and now that his groundball rate hasn’t been above 40% in four years). Moreover, for the first time in several years, Peavy’s fastball velocity dipped about 1 mph to about 91 mph.

In short: there are a lot of red flags here.

Was it just a small sample size fluke? Maybe. But Peavy’s pitch mix clearly changed with the Giants, as he relied much more heavily on his cutter and almost abandoned his sinker. Obviously he was seeing better results with that approach.

Peavy also undoubtedly benefited, as an extreme flyball pitcher, going from Boston to a home-run hitter’s nightmare in San Francisco (and the extreme change in his HR/FB ratio backs that up – it went from 12.6% to just 3.2%, hence the elevated xFIP in San Francisco). Although Fenway Park wasn’t friendly to homer hitters in 2014 either, AT&T Park was the single worst home-run hitter’s park in baseball this year.

All of that analysis is prelude to this: Paul Sullivan reports that sources say Peavy, who was connected to the Cubs for years, is “still interested in pitching at Wrigley Field.”

Should the Cubs, then, try and leverage that desire into a better deal? Should Peavy be their preferred second tier target?

I’ll discuss many of the other second tier options individually in the coming weeks, but my early thinking is that there are reasons to really like each of McCarthy, Masterson, and Hammel as targets. In the end, and it would be true of Peavy, as well, it all depends on the contract, right?

Even in his worst year, Peavy was worth 1.9 WAR, according to FanGraphs. That’s a league average pitcher, approximately, and made him worth something like $12 million or so. If he gets a multiyear deal at that rate, are you interested?

One agent source tells Nick Cafardo that he could see Peavy getting three years and $36 million after his success in San Francisco. That, after the early predictions were for a one-year, low-money deal when he was struggling in Boston.

Given the depth of the second tier, 3/$36M seems like a steep investment for a guy with some downward trajectory. Then again, maybe he can be the guy he was in San Francisco thanks to the adjustments he appears to have made. If so, 3/$36M is a pretty obvious yes, even if you saw regression in his home run rate. And if he can’t get a three-year deal? He starts to look a whole lot more attractive.

So, it depends on where you see the other second tier options landing, in terms of price, and how you value their projected future performance versus Peavy’s. I think he’s a name worth having in the mix, but after digging into the stats, I’m not sure I’d put him at the top of the second tier list for the Cubs right now. But if his desire to pitch for the Cubs means he’d look to them for a two-year, $20 to $24 million deal? And if the McCarthy/Masterson/Hammel types are realistically looking at three or four-year deals in the $12 or $13 million AAV range? Then maybe the list changes a bit.