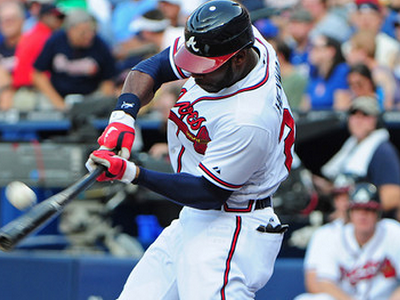 Something the new man in charge in Atlanta will have to figure out this offseason: what’s he going to do in his outfield?

David O’Brien wrote about that this week for the Atlanta Journal-Constitution, and there are a handful of potential implications for the Chicago Cubs. First, as was rumored earlier in the year, the Braves may look to dump B.J. Upton on anyone who will take him, including possibly the Cubs in a swap involving Edwin Jackson. O’Brien suggests those talks could be revisited (though I remain of the opinion that the Cubs are probably better off just hanging on to Jackson).

In each piece, the assumption is that the Braves would move one or both of Upton and Heyward for a prospect return with an eye toward the future, opening up a spot for Evan Gattis in the outfield, and/or simply taking advantage of the final year of team control before those two guys walk in free agency.

I don’t quite see the return in trade on either guy a franchise-altering thing, but each should be able to net a quality prospect or two for the Braves, if they look to make a move. The Braves, according to O’Brien, would be looking for positional prospects, in particular.

You’d be hard pressed to find a better fit in a trading partner than the Cubs, who could clearly stand to add an outfielder, might not mind if it’s just a one-year guy, and have a surplus of positional prospects from which to deal.

For the Cubs, a year of Upton in 2015 could provide not only a significant boost to the offense at a defensive spot where they can afford to add an outside player (left field – which would convert Chris Coghlan to a reserve outfield/bench role), but would also give them interesting options after 2015. If Upton acclimates well and everyone feels there’s a fit, maybe the two sides discuss an extension. After all, Upton will play most of 2015 at just 27 years old. Or, if no reasonable extension is to be had, then the Cubs can make Upton a qualifying offer, and pick up a draft pick to replace the ones they project to lose next offseason by signing a top tier arm or two.

But, yeah, don’t sleep on the “2015” part – Upton was a 3.9 win player in 2015, and one of the best bats in the NL. Care to dream about a lineup that has Castro, Rizzo, Upton, Soler, and Bryant in some order? And if Javier Baez gets over the hump? That has the makings not only of a competitive lineup in 2015, but a potentially great one.

With respect to Heyward, who would likely cost a little more in trade thanks to his much lower salary, the story is mostly the same. You wouldn’t expect quite as productive of a bat, but he might be able to play center field, giving the Cubs even more options.

To be sure, you wouldn’t want to see the Cubs “sell out” to get either player, as 2015 isn’t a lock to be a competitive year. But if they could make a move without dipping into the top tier of their prospect talent? It’s certainly worth considering. Oh, one more thing: with an extremely think outfield class in free agency this year, the competition to pick up a guy like Heyward or Upton might be fierce. That would be the flip side of the pricing question.

I’ve written previously about the peculiar attractiveness of guys like Heyward and Upton for the Cubs, and there were rumors that in trade talks involving Jeff Samardzija last offseason, the Cubs wanted either Heyward or Upton for the Braves included in a Samardzija deal.*

In other words, this isn’t merely bald speculation. Speculation, sure. But there’s a little hair there. Maybe a combover. But a good one. This is something to follow in the coming months.

*(Fun closing sentence from me in that December 2013 piece: “I don’t think you trade away a Samardzija for a Heyward if you’re thinking that trying to compete at least in 2015 is impossible or inadvisable.” I didn’t buy the 2016 talk three years ago, I didn’t buy it two years ago, and clearly I didn’t buy it last year, either. That’s not quite a back-pat, mind you, and, even if it is, it’s taking place in a footnote parenthetical. I think that’s ok.)