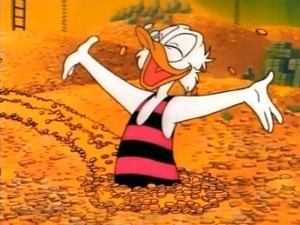 [This entire post takes on an entirely new character in light of all the Joe Maddon news and rumors. I had this written and ready to publish moments before the Maddon stuff broke on Friday. I saved it for today because of the news, but it’s just so interesting now to think about the Friedman/Epstein/Maddon interplay potentially going on behind the scenes.]

When the Los Angeles Dodgers pulled off one of the biggest front office moves in recent memory two weeks ago by snaking Andrew Friedman from the Tampa Bay Rays, we all expected that it probably took a healthy contract to get it done.

Not surprisingly, Andrew Friedman's deal with the Dodgers is record-setting: from sources, $35 million over 5 years, plus incentives.

When the Cubs brought on Theo Epstein to be their President of Baseball Operations three years ago – a move that was comparable to the Friedman move, in terms of perceived value and importance of the hire – his contract was reportedly five years and $18.5 million. That was an enormous sum at the time, and Friedman’s deal just blew it out of the water.

Folks have argued for some time that elite front office talent – to the extent it can accurately be identified – has been undervalued for years. Perhaps we’re about to see an explosion in front office salaries, and, given the talent the Cubs have been accumulating, it’s fair to wonder whether they’ll be disproportionately impacted.

This all sets up, of course, the ongoing discussion about if/when Epstein should be extended by the Cubs. Epstein is contracted to the Cubs for two more years, so there’s not an immediate urgency to get a deal done, but it would be nice to have every duck lined up in the coming years as the Cubs presumably emerge from a deep rebuild.

To the extent the front office market operates similarly to the player market, however, Epstein probably just landed a really nice argument (the Friedman comp) that he deserves a raise. The problem there, of course, is that the Cubs haven’t actually won anything with Epstein in charge, even as those paying attention can clearly see the dramatically positive impact he’s had on the organization. The extension negotiations, then, could be a little tricky. Maybe that’s why nothing has yet landed, and maybe everyone involved will wait to see how 2015 plays out before deciding on terms (I say it that way because, for my own heart and sanity, I’m going to assume that an extension will eventually happen – it’s just a matter of how much Epstein gets).

Even if Epstein gets a 50% salary bump, mind you, he’d still be making only about what a typical decent (but not great) reliever gets in free agency. He’d be making less than the highest-paid manager. Markets are relative, of course, but I’m just pointing these things out.