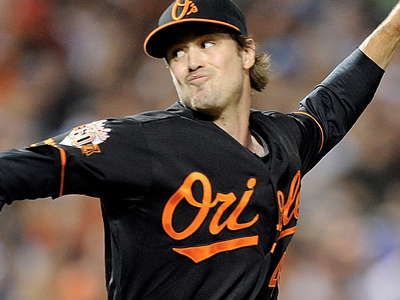 A name that frequently pops up in peripheral – fan – discussions about the Chicago Cubs’ offseason is Andrew Miller. I see it regularly, so, at the outset of free agency, I thought he might be worth a brief discussion.

The front office has expressed an interest in adding a lefty reliever to the bullpen mix in 2015, given that right now, it looks like Wesley Wright, Zac Rosscup, Joe Ortiz, and maybe a failed starter or two are the Cubs’ only options. There is not a clear, obvious, dominant option among that group, even as we know that Rosscup and Ortiz have upside, and Wright was very solid last year. I’m on board with the Cubs looking to add a lefty externally, at least to compete.

Here’s where I hit something of a stumbling block when it comes to Miller, though. Setting aside his performance for a moment, Miller isn’t so much a guy you get to put a lefty in your pen. He’s a dominant reliever who happens to throw lefty. And you’re going to pay him, excessively, to be that guy. On the flip side, LOOGY types can be acquired rather cheaply, and, given the Cubs’ bullpen depth at the back end, maybe that’s the type of lefty they need to add.

But, hey, I can acknowledge: more quality arms is always better, right? It’s not like the fact that Miller can be a late-inning reliever, regardless of handedness, is a bad thing. He’s a great reliever, and the fact that he’s a lefty is actually just a nice bonus. So maybe the Cubs should pursue him anyway?

Well, here’s the thing: Miller is one of the top two or three relievers on the market this year, and he’s going to be paid handsomely. MLBTR projects a four-year, $32 million deal. The FanGraphs crowdsourcing project has him at 3/$24 million. Given that Koji Uehara just got two years and $18 million from the Red Sox, despite being 39 and having a deep slide in the final two months of the year, I think Miller could easily get that four-year deal. Call me crazy, but I don’t think 4/$40 million is out of the question, given the way bullpens are being valued these days.

Is adding a top notch reliever to the pen going to be one of the Cubs’ best uses of $10 million this year? Especially given relievers’ notoriously finicky performance nature?

There is probably something to the evolution, given that he became a fastball/slider reliever, exclusively, in the last two years, and he’s seen his velocity rise (Brooks). Maybe that’s enough to give you confidence that his breakout is sustainable.

The upside with Miller is absolutely legit, as he could be a two-win reliever over the next several years – that’s a tremendously valuable weapon to have at your disposal, and is definitely worth more than $10 million per year.

I just struggle with whether it’s the best use of the Cubs’ resources. If you wanted to make the argument that it is, you’d probably have to say that the Cubs’ bullpen, while excellent to end the year in 2014, is still very young and potentially exposed to injury and youthful struggles. Having a stabilizing presence like Miller – if that’s what he proves to be – could actually be disproportionately valuable to a team like Cubs.

On the other hand, given the expense and the uncertain nature of Miller’s breakout, I might point to the Cubs’ extreme bullpen depth – and it’s quality depth – and the possibility that it might be interesting to see what guys like Jacob Turner and Dan Straily (just as examples) could do out of the pen if converted (because not everyone is going to make the rotation) all point to not adding a full-time reliever this offseason.

Put it this way: if Miller costs $10 million per year over four years, the Cubs could probably have their pick of the second tier starters for less, or could get Russell Martin for maybe four or five million more per year over the same length of a deal.

So, in the end … I don’t really know where I land. That’s why I started this out as a “let’s talk about.” Interest in Miller is going to be exceedingly high, given that if a team like the Cubs could use him, basically every team in baseball could use him.