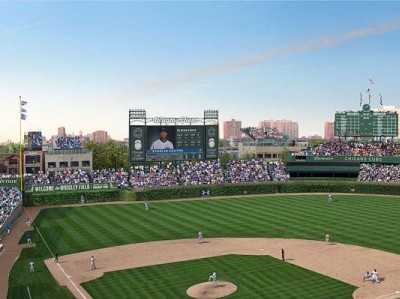 A little less than two weeks ago, Dave Kaplan reported that the Ricketts Family was getting close to purchasing some of the rooftop buildings that have been the subject of ongoing tumult as the Chicago Cubs looked to renovate Wrigley Field, and install outfield signage that could partially obstruct rooftop views into the park. The one owner Kaplan mentioned by name is George Loukas, who owns multiple rooftops.

And now it’s Bruce Levine reporting that Loukas is indeed close to finalizing a deal to sell two of his rooftop buildings to the Ricketts Family. When the Cubs announced that the press conference introducing Joe Maddon as the team’s new manager on Monday, which cannot be at Wrigley thanks to the work there, would be held at the Cubby Bear, owned by Loukas, there was reason to wonder if something on the rooftop issue had proceeded positively.

Levine’s piece goes into some detail on the possible sale, and it’s worth a read. It includes an estimated price for each of the buildings, at $6 million per, though Levine cautions he could not get that number confirmed by a second source. That price does seem low, given where I was told the negotiations started a couple years ago (much, much higher), but obviously the situation has changed quite a bit since then, and we also don’t know exactly what is being purchased (and what percentage, and how the business operates thereafter, etc. – these things are complicated, and a bottom-line purchase price can be deceiving).

If this sale does go through (interesting that it’s happening in tandem not only with the renovation at Wrigley but also with the Ricketts Family’s sale of a stake in the Cubs), it could be the first step in finally resolving the rooftop issue in a comprehensive way.Although the purchases might start with just these two, by the way, it will undoubtedly impact how the other rooftops proceed. That would be very, very good news.

As I wrote when we last discussed the topic, there’s so much potential upside to marrying up the rooftop buildings and the Cubs entity in some way:

For one thing, the likelihood of a damaging lawsuit tied to the renovation – and the risk of a shutdown – probably drops dramatically.

For another thing, the Cubs would suddenly have options with respect to the outfield signs: they could move some of them, or lose some of them, depending on what is better for the ballpark and for the total revenue picture (sign revenue versus rooftop revenue).

For yet another thing, buying rooftops allows the Cubs to expand the Wrigley Field footprint without actually expanding Wrigley Field. The rooftop seating could more formally be incorporated into “Cubs” seating, and the space within the rooftop buildings could be used for other Cubs purposes – retail space? Official Cubs bars? Cubs museums? And so on.

For still another thing, having an official affiliation between a large number of the rooftops and the Cubs could create an even more integrated experience around the park. Obviously that’s what the Cubs are shooting for with the plaza to the west, but utilizing the rooftops, the Cubs could expand that to the north and east.

And for one last thing, it would solve – at least for some of the rooftops – the lingering issue of what’s going to happen long-term with the rooftops, and what happens when the current revenue-sharing agreement expires in 2024. That’s been a thorn for the Cubs in these negotiations, and, if they buy enough of the rooftops, there would no longer be any concern that, at that point, the Cubs can do whatever they want with their ballpark (well, subject to City and neighborhood restrictions).

This remains one of the most important business-side stories in the Cubs’ world right now, not only because of its close relationship not only to the ongoing renovation, but also because of the long-term financial and experiential implications for the Cubs and Cubs fans.