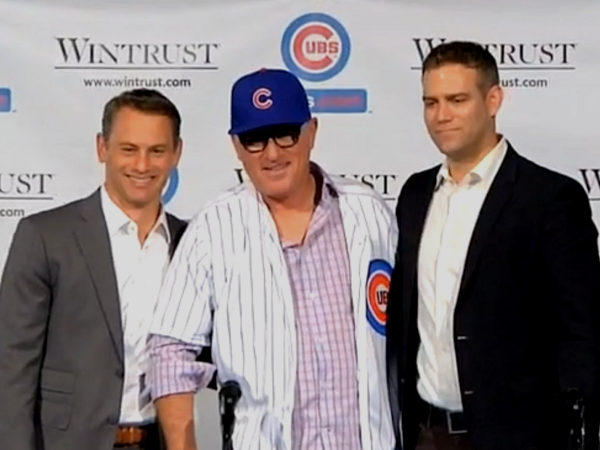 Listening to his appearance on ESPN Radio last evening, I was struck by just how assertively Chicago Cubs President of Baseball Operations Theo Epstein was denying any allegations of tampering with respect to newly-hired manager Joe Maddon.

“There was no tampering whatsoever,” Epstein said on the Waddle and Silvy Show. “Joe had an out in his contract and we did not engage him in any way until that out was exercised. I understand [Tampa Bay is] disappointed, but I also don’t appreciate the accusations. I understand where they’re coming from, but we welcome an investigation if MLB feels there has to be one, because we have nothing to hide.”

Patrick Mooney has a write-up on the issue, with more from Epstein, including a specific chronology of events that had the Cubs receiving an email from Maddon’s agent about the opt out, and Epstein immediately contacting MLB to confirm before even responding. If MLB did want to investigate, it sure seems like that sequence of events would be relatively easy to prove. And if there had been back-channeling beforehand, then the Cubs and Maddon’s camp were already planning an elaborate charade. I suppose that’s possible, but doesn’t it seem more plausible that there simply was no tampering?

As it has been consistently thus far, the latest take on the Tampa side merely sounds like circumstantial suspicion, and dubious at that. Here’s Joel Sherman:

Maddon was making $1.8 million. The Rays offered $3 million annually for three years in an extension. Maddon wanted at least $4 million. At an impasse, Maddon opted out. Chicago gave Maddon a five-year, $25 million contract because, in Epstein’s words, he is “a difference- maker in the clubhouse and in the dugout.”

The Rays are, at minimum, suspicious he would walk away from guaranteed money unless he knew much better was out there. If he or his agent, Alan Nero, spoke contract with the Cubs before Maddon opted out, the Rays believe they can make a tampering case.

Nero and the Cubs, of course, say they went by the book. Tampering charges — without a smoking email or text or tape — are difficult to prove. Still, Rays officials are said to be furious and could seek a penalty and/or compensation.

The Rays are suspicious that a guy who was universally regarded as among the top few managers in the game would know he could do better than three years and $9 million on the open market? Seriously? When top manager salaries approach $5 million and contract lengths approach five years? Is the Rays’ entire case predicated on Maddon and his agent having absolutely no sense of the market whatsoever?

I’ve got to believe they’ve got more than that or they would stop tugging at the media’s ear to get them to write more about the ooh-evil-tampering Cubs. Maybe I’m giving them too much credit. Or maybe this will be the end of the discussion.

But, even if it isn’t, proof of tampering remains very difficult, and the Cubs and Maddon’s camp have laid out, very assertively, a time line that is both credible and non-tamper-y.