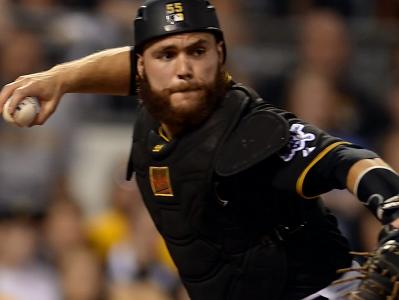 The Yankees have sent catcher Francisco Cervelli to the Pirates for reliever Justin Wilson, according to Jon Heyman and other reports.

And if you are immediately wondering whether the Pirates just picked up a catcher to replace Russell Martin, signaling that they believe they are out on him, I understand, My head went there, too. After all, Wilson is a decent reliever, and Cervelli is a solid catcher. A back-up with the Yankees, to be sure, but one who is coming off a huge year in limited duty (.301/.370/.432). And the Pirates do already have Chris Stewart and Tony Sanchez.

It sure feels like a signal. Joel Sherman thinks it’s a signal:

But Heyman is emphasizing the “insurance” part:

Pirates acquisition of cervelli doesn't change pursuit of russell martin. They are still in on martin.

Good insurance, indeed. With Martin making his decision as soon as the next week or two, though, this isn’t quite the same thing as the Pirates picking up a guy far before they know whether they’re going to find out about the other guy. They might actually have a decent idea of how Martin is leaning at this point (and they certainly know whether they’re able to make him a compelling offer).

All in all, it feels like an indication that the Pirates don’t like their chances of retaining Martin at this point, even if there’s still a possibility. That, of course, doesn’t mean it’s smooth sailing for the Cubs, but it could be one fewer suitor – and one with whom Martin had a good relationship.