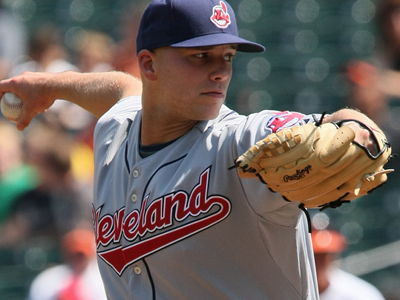 What a difference a year makes. Not even a year.

Before the 2014 season, Justin Masterson looked to be among the crew of starting pitchers ready to cash in on a high eight, or maybe even nine-figure deal after the season. Since coming to the Indians with from the Red Sox in mid-2009, Masterson broke out as an excellent mid-rotation arm with number 2 upside. In 2013, he’d posted a 3.35 FIP/3.33 xFIP year worth 3.5 WAR. And he wouldn’t even turn 30 until 2015. Things looked good.

And then the Indians made Masterson a low-ball extension offer (or was it low-ball?), he bet on himself in 2014, and may have lost.

Masterson was a shell of himself this past season, dealt with a knee problem all year, and saw his velocity drop dramatically. The four seamer lost 3mph (to just 90mph), the sinker lost 1.5mph, the (little-used) changeup lost almost 3mph, and the slider lost 1.5mph. If you’re looking for a gigantic set of red flags, that’s it. Was it just the knee problem? Maybe. I’m no doctor, and I’ve got only the information that’s out there. But it was, after all, his right knee (the one off of which he drives), so it’s not hard to see the relationship. Still, here’s the thing: just because we have an explanation for the velocity drop – if that’s what this is – doesn’t mean we can appropriately project a rebound next year.

That’s why it seems likely that Masterson will have to settle for a one-year “prove it” deal, which would allow him to show teams he is healthy, and possibly return to the free agent market while he’s still relatively young.

And the reason this is all relevant, of course, is because the Cubs have been connected to Masterson several times over the last few months. The latest comes from Jerry Crasnick, who reports that the Cubs are among several teams who’ve either checked in on Masterson or sought his medicals.

Whatever happens with Masterson, any team signing him will at least have the benefit of a thorough physical. But they’re not really going to know what they’re getting until Spring Training rolls around. For the Cubs, I have no problem with them rolling the dice on Masterson (not unlike a roll of the dice on someone like Brett Anderson) with a low-cost one-year deal, and all the better if they could get a team option tacked on.

One interesting thing is that Masterson leaned more heavily on his sinker in 2014 than ever before (Brooks). Setting aside any knee issues, Masterson wouldn’t be the first pitcher to see his velocity decline as he approached 30, and then go through an adjustment period as he reinvents himself as a different kind of pitcher. I could easily see Masterson resuming mid-rotation effectiveness by continuing to utilize that sinker. Consider that, in 2013, opponents’ BABIP against his sinker was just .295. In 2014, that number leapt all the way to .347. Yes, BABIP against a sinker is likely to be higher than most pitches (because groundballs tend to go for hits more than fly balls and line drives), but that was an enormous jump. If it settles in a little lower (the career mark against his sinker is just .318) and his other peripherals regress to where you’d expect them? There could be something there.

So, I’m intrigued by Masterson as a buy-low candidate for the Cubs. The concern I’d have is that the Cubs not necessarily sign him to be a guy that they’re counting on *for sure* in the rotation. In other words, I’d be much more comfortable with the Cubs going after Masterson if they’ve already locked down a front-end type and a quality second tier type. You can’t always get what you want, of course. In that regard, I suppose I’d be into the Cubs going after Masterson at the right price regardless of anything else they do (and I’d simply either be happy about, or disappointed by, the other stuff, independent of Masterson).

It’s possible, by the way, that Masterson may prefer to find a team that will sign him on a one-year deal, and is more likely to deal him mid-season if he’s finding success (thus, no qualifying offer after the season and no noose of draft pick compensation). The Cubs, in theory, are looking for guys to help them win in 2015, not guys to flip.

Of course, if Masterson does rebound, then he could certainly help the Cubs win some games in 2015.