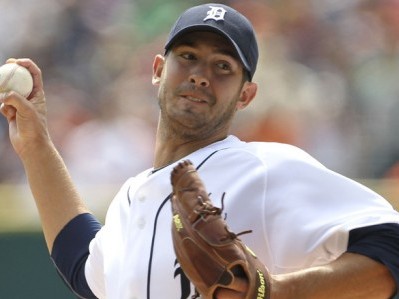 It’s no secret that the Boston Red Sox have an outfield surplus – to say the least – and they’d like to use that surplus to pick up a sure-fire starting pitcher.

That pitcher is not likely to be an alternative to, for example, signing Jon Lester, because the Red Sox could use multiple sure-fire starting pitchers this offseason. But, then again, with every starter the Red Sox add who isn’t Jon Lester, I suppose their urgency for signing him goes down slightly. And maybe talks to acquire such a pitcher is a sign – a teeny, tiny, ok-you-should-probably-ignore-it – that the Red Sox aren’t convinced they’ll get Lester.

For that reason, and for other – more sturdy – reasons discussed below, this is pretty notable:

#Tigers & #RedSox seem to have makings for a Porcello-Cespedes deal. But would have to be larger. #Tigers would need a starter coming back

To be sure, that reads like something just shy of a “report,” but pros like Stark tend not to pull this kind of thing out of nowhere. There’s usually at least a little background info informing the speculation.

Getting Porcello for Cespedes – an impending free agent who, by contract, cannot even be given a qualifying offer at the end of the year – and one of the Red Sox’s marginal young starting pitchers is probably a great move for the Red Sox. Cespedes is superfluous in the extreme right now for the Red Sox. They might as well be getting Porcello for free if a deal like this went down. Yes, I’m exaggerating (because Cespedes is still an asset with value, even if the Red Sox don’t have a spot for him). But still.

So, about those “other reasons” this is notable. First, there’s the market impact. Once the “price level” for these one-year starters is set, we could see more movement on guys like Mat Latos or Jordan Zimmermann or Jeff Samardzija. The Cubs could potentially get involved on a guy like Zimmermann, for example, depending on how a great many other things shake out (or, a team with whom the Cubs could compete on a second tier starter could be in on one of those guys as an alternative, and that could have an impact, etc.).

For another thing, if the Tigers trade away Porcello, even if they pick up a young arm in the deal, they’ll likely slide into the free agent market for a starter. That could mean top tier – re-signing Max Scherzer, for example – or it could mean being a little aggressive in the second tier.

For a third thing – and this is the fist-shaking part – I love Porcello as a post-2015 free agent target for the Cubs. And, because I believe the Red Sox front office to be smart, I could see them landing Porcello now, and aggressively signing him to an extension before he has a chance to put together a signature walk season. Porcello, not yet 26, was rushed to the majors and seems to be getting better every year. Tell me you wouldn’t want the Cubs to buy that guy’s age 27, 28, 29, 30, and 31-year-old seasons.

We’ll see if anything comes of this, but it’s a pretty obvious superficial fit for these two teams. The Tigers could put Cespedes just about anywhere in the outfield, making Rajai Davis a great fourth outfielder once again, rather than a dicey starter. Heck, they might make as much sense for Cespedes as any team out there. And if they’re willing to move Porcello to the Sox to get him, then it just makes sense.