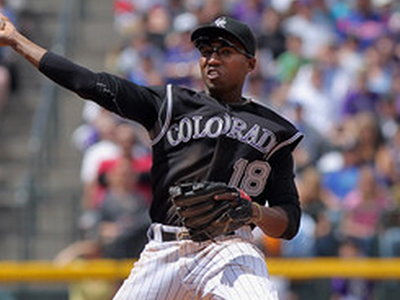 The Chicago Cubs have made their first minor league signing of the year, which means it’s obligatory to remind folks that (1) “OMG, WORLD SERIES HERE WE COME!” jokes are tiiiiiiired; and (2) every team signs marginal players to minor league deals for a variety of reasons, including depth, potential upside, and minor league roster management. Just last year, the Cubs signed Chris Coghlan, Tsuyoshi Wada, John Baker, and Chris Valaika to minor league deals. They also got Justin Ruggiano by trading Brian Bogusevic, whom they’d signed to a minor league deal the year before.

The Cubs have signed infielder Jonathan Herrera to a minor league deal, which will probably also come with a Spring Training invite. Herrera, 30, is a defensive specialist who can play all over the infield, and does so quite well. The bat, well … did I mention his defense? I partly kid, because you wouldn’t expect a big bat from a guy on a minor league deal who plays quality infield defense. He offers no power at all, but he’s a .260ish hitter with a career 7.7% walk rate and a 14.3% strikeout rate, and he switch-hits. There are worse utility guys out there.

Herrera has seen time in the big leagues each of the last five years, but finished the year on the shelf with the Red Sox after late-season elbow surgery (bone chips removed). Presuming he’s healthy, he could compete for a bench job next year out of Spring Training, depending on how the rest of the Cubs’ roster shakes out.

Given the Cubs’ infield depth, a job on Opening Day seems pretty unlikely. Even still, stashing Herrera at AAA Iowa gives the Cubs nice depth in case of injury, and protection against having to rush Addison Russell if an opening pops up at the big league level before the Cubs are ready to bring him up (or if that opening is a bench job, rather than an everyday spot). Each year it seems like we see this kind of need pop up, and Herrera strikes me as about as good of a pure depth guy as you’ll find out there on a minor league deal.