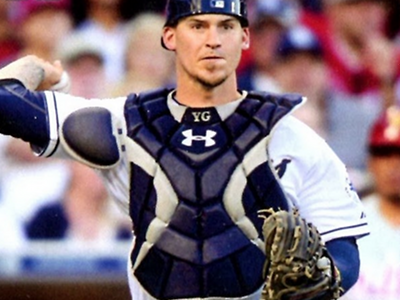 It’s either a very early morning or a very late night report, but Kirk Kenney and Dennis Lin report that the long-rumored Padres-Dodgers deal involving Matt Kemp and Yasmani Grandal has now been agreed to.

Heading to San Diego would be Kemp, catcher Tim Federowicz, and about $30 million (Kemp is owed $107 million over the next five years). Heading to Los Angeles would be Grandal, as well as pitcher Joe Weiland and probably pitching prospect Zach Eflin.

It strikes me as a relatively fair trade, with the Dodgers leveraging their financial advantage to pick up extra youngsters in the deal, and the Padres getting Kemp on what is now a solidly under-market deal. I don’t entirely understand why these teams were so willing to help each other within the division on this kind of a gigantic deal, but whatever.

For the Dodgers, they keep on adding young arms after picking up Andrew Heaney from the Marlins last night. And in Grandal, they get a young catcher with a ton of upside. I kind of hate them right now. But, you know, Andrew Friedman gonna Andrew Friedman.

The deal probably takes the Padres out of the market for a big outfield bat, and probably loads the Dodgers up for even more possible dealing. Maybe they now get Chase Utley from the Phillies? Or maybe even Cole Hamels? Even after adding Brandon McCarthy? They could be even more ridiculous next year. (UPDATE: I was still catching up from the overnight hours – it appears that the Dodgers already flipped some of the young pitching they got from the Marlins to the Angels for Howie Kendrick.)

The Dodgers also clear some salary space – if they need it – and one of the outfielders in their log-jam. With Yasiel Puig, Carl Crawford, Andre Ethier, Joc Pederson, and Scott Van Slyke all still on the team (and Chris Heisey), I’d argue they probably still need to move an outfielder.