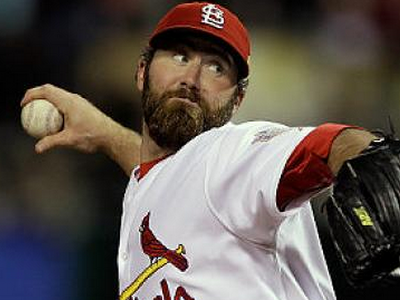 Last evening, word broke that the Chicago Cubs had agreed to a deal with former Cardinals closer Jason Motte, who will enter 2015 two years removed from Tommy John surgery. Ken Rosenthal reports that Motte has passed his physical, and will receive $4.5 million, with a chance at another $2.5 million in incentives.

If you’re thinking that’s a lot of money for a reliever who didn’t pitch in 2013 and then struggled in his return from TJS in 2014, you’d be right. But, here’s the thing about that: it cuts both ways. If Motte’s market was such that he had to settle for a minor league deal, that probably would tell you a little something about how he was projecting at the end of 2014, how healthy he is right now, and how confident teams are (not) that he can contribute meaningfully in 2015.

Being that Motte got $4.5 million guaranteed and $2.5 million in incentives (likely tied to closing), however, you can bet that his market was relatively robust, at least for a TJS recoveree. That says something very good about how he was projecting at the end of 2014, how healthy he is right now, and how confident teams are that he can contribute meaningfully in 2015. Sure, $4.5 million isn’t going to sink the Cubs either way, but as they approach their payroll ceiling for 2015 with still a couple spots to address, they’re not going to toss that money at a huge risk without believing that Motte can contribute in the late innings in 2015. Now two years removed from TJS, Motte has as good of a shot now as ever to be the guy he was between 2010 and 2012. If the Cubs get that guy? They just got a huge steal.

By all accounts, too, Motte is a great clubhouse guy, and could be a veteran leader in a bullpen otherwise full of youngsters. He’s still well-regarded in St. Louis, and it sounds like he’s a champion of pediatric cancer causes, something near and dear to several Cubs players.

Once the deal is finalized and announced, Motte will have to be added to the 40-man roster, which, after the Jon Lester signing, now stands at a full 40. Thus, a spot will have to be opened up. The Cubs could have another move in mind – a trade involving a rumored player, for example – but they may just opt to outright someone off of the roster. Among the plausible options for derostering are Logan Watkins, Christian Villanueva, Matt Szczur, and Brian Schlitter. Not that you’d want to see the Cubs dump any of those guys, but it’s possible one could sneak through waivers right now – it’s a crowded time for 40-man rosters – and then be outrighted to AAA Iowa.

Although it presently seems like the Cubs are absolutely overflowing with bullpen options – almost uncomfortably so – this front office has seen several years in a row now how a weak bullpen can derail a season before it even gets off the ground. Further, they’ve seen how easily a bullpen that looks good on paper (that was the case entering both 2013 and 2014) can fall apart with an injury or two and a bout of ineffectiveness or two. So, if having four great relief options and six very good relief options sounds good … then it’s time to increase that to six great relief options and eight very good relief options. The bullpen cannot be the undoing of the Cubs in April and May in 2015. There’s too much talent in the other areas to waste a hot start if the offense and the rotation try to give you one.

With a manager who isn’t slavishly devoted to bullpen roles, having as many talented arms as possible available should play to Joe Maddon’s managerial strengths, too.