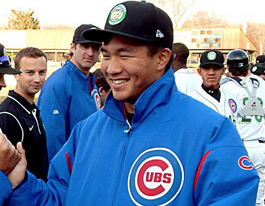 There was not much doubt who the first pitcher to undergo the Prospects Progress treatment this winter would be. Ever since I ranked him fifth in the organization in the mid-season update of the Bleacher Nation Top 40 Prospects list, Jen-Ho Tseng has been one of the prospects I am asked about the most.

Or, to be more precise, I’ve been asked about his ranking. Generally the questioner wants to know if I was just plain crazy when I made that list. No one else had Tseng anything close to that high, so what was I thinking?

While I doubt that he is a lock to stay in the Top Five (more on that later), I remain very high on Tseng. That is not to say that he has a very high ceiling. He doesn’t. We’ll go into that in a bit as well.

But first, if you happen to be new to the series, welcome to Prospects Progress! In this winterly series each article will take one prospect … maybe a big name you instantly recognize, and maybe a fringe guy you haven’t heard of … and will spend some time looking at his numbers, his risk factors, and how he projects to fit into the Cubs’ future.

Tseng, for most fans, is probably more of a fringe guy, but I think that will change. He won’t be their future ace, but there is a strong chance that Tseng will be a valuable part of the Cubs future. The organization didn’t give him $1.625 million to sign last year for no reason.

The biggest knock on Tseng has been his raw stuff. It just isn’t all that exciting. He has three pretty good pitches he can throw for strikes (fastball, curve, changeup), but none of those pitches are very impressive. They are good pitches, but not great ones.

FanGraphs grades all three as having 50 potential; that’s not a bad thing, particularly when combined with a command upside of 50+. MLB Pipeline lists the fastball at 60, the curve at 55, and his changeup at 50. Baseball America saw him pitch last spring and listed the curve as above-average, but they also noted that some scouts thought the changeup might be his best pitch. There was also talk of a seldom used slider that they graded as average.

But you don’t need to take their word for it. Tseng is one of the few low minors pitchers who enjoys some fairly good video coverage on the Internet. Shadows of Wrigley and Cubs Insider put together four and a half minutes of footage on YouTube in July that is well worth watching. There is also some pre-Cubs footage shot in a game between Korea and Taiwan available as well, and more is just a Google search away.

And while the tape confirms that his pitches aren’t particularly exciting when compared to some of the more well-known pitching prospects in baseball, one thing that stands out is his approach. Tseng relentlessly attacks the inside of the plate against right-handed hitters, a method that I suspect has quite a lot to do with his professional success so far.

Tseng spent all of 2014 pitching for Kane County in the Midwest League, and he effectively dominated the league all season. At the age of 19, he was on the young side for that level, but his experience pitching in Taiwan before coming to the United States certainly seems to have adequately prepared him. His numbers are very impressive.

Now let’s put those numbers into some context.

His ERA ranked him 5th in the Midwest League (min 100 innings), and by FIP he was 7th (and the first teenager on the list). His remarkable BB/9 was the best in the league, and his K/BB of 5.67 was best in the league by a wide margin. Prefer K-BB% (that’s a debate for a different day)? He ranked 7th with a 17.5%, and is the highest teenager on the list.

But that’s just the Midwest League. So, just for the fun of it, let’s see how he measures up against all of minor league baseball, from the rookie levels to Triple A.

Depending on which stats you value, a case can be made that Tseng was the best teenage pitcher in the minors in 2014, and it would tough to find more than three or four others who could even be part of the conversation. Furthermore, when it came to doing what pitchers are supposed to do best – keeping people off base and getting them out – he ranked among the best at any level. It is open to question how valuable the “best teenager” award actually is, but what is beyond dispute is that Tseng enjoyed a remarkable season in his first year as a stateside professional.

A fair bit of his success is built on the strength of that wonderfully low walk rate, but I’m not sure that can be used as a knock against him. Even if that BB/9 number were to balloon by twenty percent over his 2014 figure, he’d still be in the top 5% or so in all of minor league baseball. The ability to throw strikes, get outs, and not give up hits is the essence of pitching success, and that is what Tseng does.

Still, there are some red flags here. His strikeout rate is nothing special, and a great strikeout rate is generally one of the things we like to see in a top tier pitching prospect, especially in the lower minors. Also, we have to consider that Tseng had plenty of experience pitching against some tough competition in international tournaments before he came to America.  That extra experience probably gave him an edge in 2014 that may not reappear at other levels. Midwest League hitters never really figured him out, but the more experienced hitters higher up in the minors eventually will.

As I said in the introduction, I remain high on Tseng. That said, I don’t necessarily expect he’ll remain in the top five when I rerank the system in the spring. Now healthy, both Edwards and Johnson are likely to pass him on the pitching side of things, and I’m not sure he’ll continue to outrank Almora or Schwarber either. I haven’t started crunching the numbers that lead to my minor league rankings yet, but I can easily see Tseng falling down a few slots just as a result of changes that are out of his control when all is said and done.

And keep in mind as well that Tseng, as good as his 2014 season was, projects best as a middle-to-back-of-the-rotation starter. Without one or more potentially elite pitches, he just doesn’t qualify as a future ace, and with an already-depressed strikeout rate, I’m cautious even projecting him as a number three guy.

Still, I find it very hard not to be optimistic about his future (as compared to that of any pitching prospect, anyway). His peripheral numbers are among the best I have ever seen for a pitcher his age, and frequently already rank him among the best in minor league baseball. Minor league success does not always go with status as a high prospect, but success is never a bad thing in its own right.  And while it is true that he has yet to be challenged, it is equally true that he has had only one season of instruction from the pitching coaches in the Cubs system. He has room, and time, to improve to some degree himself.

I rank prospects through the double lens of Projection and Risk. Tseng does not score remarkably high in Projection, but he has one of the lowest Risk levels of any A ball pitcher I can think of. There is a plenty of bust potential here, and not just by virtue of him being a pitching prospect, but there are also plenty of positives.  As A-ball pitchers go, he looks to be one of the safer bets to come into the system  in some time.

Look for Tseng to begin 2015 in High-A Myrtle Beach. If he is continuing to be generally unchallenged after 50 or 60 innings, I think the Cubs will push him with a midseason promotion to Double-A. That, I think, will be where we find out just what sort of a future Tseng has to offer.