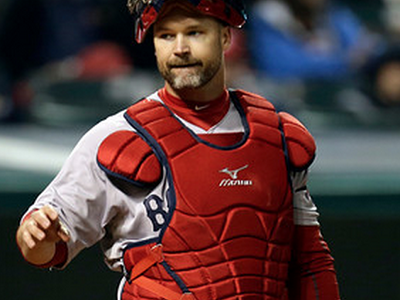 [See updates below. Looks like a report came a little too soon, but good on Heyman for correcting things. The text of the original post, with updates, is below.]

When the Padres – among their countless other moves – reportedly sent back-up catcher Ryan Hanigan (whom they technically hadn’t even received yet from the Wil Myers trade) to the Red Sox for Will Middlebrooks, we knew that it changed the David Ross dynamic, since he was choosing among the Padres, Red Sox, and Cubs.

It made it likely that Ross was down to the Padres and Cubs, and, according to Jon Heyman, it didn’t take long for the decision to come down:

We’ll have to see the terms, but it makes sense both for the Padres and for Ross.

For the Cubs, I suspect their pursuit of catching now winds down, because I’m thinking this was mostly about Ross, not about feeling like they have to replace Welington Castillo. Obviously you never know what comes up – look how many catchers have been traded already this offseason – but I think the Cubs will enter the season with a Miguel Montero/Welington Castillo tandem behind the plate, and I’m pretty pleased about that.

From there, the Cubs will likely look to bring in a veteran catcher on a minor league deal so that they can have a little extra depth at AAA Iowa. Maybe John Baker would consider returning on that kind of deal.

Per source familiar with negotiations, David Ross has NOT yet agreed to deal with Padres

If Ross doesn’t go to San Diego, but Hanigan does go to Boston, it certainly makes you wonder what could be up. Ross could possibly still go to Boston, I suppose, with the Red Sox then shopping young catcher Christian Vazquez.

Or, Ross could still wind up coming to Chicago.

We’ll see if this is just a technical thing. Heyman’s original report was unequivocal.

UPDATE 2: I’d say this is a pretty good source:

David Ross tells us: "I do not have a deal with the Padres"

Again, though, the question is whether there’s no agreement whatsoever, or if there are just some things to finalize before the deal is technically complete.

David ross is still deciding. Appears to be cubs or padres. Apologies for jumping the gun earlier.

So, do we want to take a guess at what happened here? Seems like negotiations were ongoing with the Cubs, Padres, and Red Sox, and the Red Sox must have bowed out (or were ruled out), so they pulled the trigger on the deal for Hanigan. The Padres must have felt pretty good about their chances at that point, being that they dealt away Hanigan, and maybe were sitting pretty with their offer. Wires got crossed, and Heyman made his report. There was likely a flurry behind the scenes of either the Cubs or Ross’s camp indicating to folks that, no, the Cubs weren’t out yet.

That’s all just a guess, but it’s a pretty reasonable timeline. So, it stands to reason that the Padres have a strong offer out to Ross right now, and the two sides there are just waiting to see how the Cubs respond.

UPDATE 4: Bruce Levine says not only are the Cubs not out, but they’re the favorite:

Catcher David Ross has not signed with Padres . Cubs still have inside track .

Given Heyman’s original report and the Cubs’ waiver claim of (righty-hitting) catcher Ryan Lavarnway, I’m pretty surprised to see Levine say that. That said, there’s nothing inconsistent with the Cubs grabbing Lavarnway – as depth? as protection against not getting Ross? as a ready-made back-up if the Cubs don’t get Ross and want to shop Castillo? – and still being in on Ross. Even if the Cubs got Ross tomorrow and then dumped Lavarnway, all they’d be out was the waiver fee to claim Lavarnway. In other words, while there are tea leaves to read here, it’s entirely possible that the Cubs are still in on Ross.