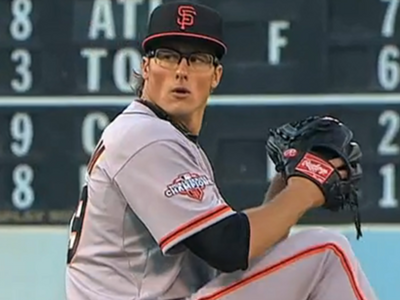 Given the rapidity with which the players who preceded him on the waiver wire were shuffled in and out of the organization, it’s probably for the best that the holiday travels/sickness/kid-ness delayed my write-up of the Cubs’ waiver claim of Mike Kickham earlier this week.

In the process of opening up two 40-man roster spots by trying to outright Ryan Lavarnway and Shane Peterson to AAA Iowa (unsuccessful), the Cubs used one of those spots to officially sign David Ross, and used the other to claim a big, strong lefty from the San Francisco Giants, who themselves needed to open up space to add Jake Peavy back to the 40-man roster.

Kickham, 26, is a 6’4″, 220 lbs lefty who has primarily been a starter in his career. A 6th round pick out of Missouri State in 2010, Kickham reached AA in just his second full professional season. He showed a big arm, a mid-90s fastball, and some control problems. Still, he was effective enough to get promoted to AAA for the 2013 season, and he was shuttled back and forth between AAA and the bigs for most of 2013. He pitched acceptably well at AAA, but not so much in the bigs. This past season, Kickham was mostly at AAA, posting a 4.43 ERA over 148.1 (PCL) innings, striking out 131 and walking 64.

Before 2014, Kickham was the 20th best prospect in the Giants’ system, according to Baseball America, who noted in the 2014 handbook that Kickham “has a plus fastball that touches 95mph, and [] has shown a knack for making his breaking ball harder or tighter as the situation warrants.” Kickham’s stuff, BA said, “has few peers in the system.” The big problem, as it so often is for big arms with great stuff who can’t quite break through in the bigs: control. Kickham has battled wildness, which can be effective in the lower minors, but tends to weed guys out as they move up.

Still, it’s not difficult to see why the Cubs would want to take a chance on a guy who has good velocity and good stuff, and who reached the big leagues so quickly after being drafted. That’s all the more true when you consider (1) Kickham still has a minor league option left, so the Cubs could send him to AAA Iowa after Spring Training without losing him, so long as they keep him on the 40-man roster; and (2) although the Giants have likely been dreaming on Kickham’s starting upside, the Cubs have the luxury of seeing what he can do as a reliever and/or lefty specialist, given their already extreme back-end starter depth (especially given that option).

Given the Cubs’ wide open lefty competition right now, this is probably a good chance for Kickham, too. The market for lefties wasn’t great this year – guys like Tom Gorzelanny and Joe Thatcher are still out there, though, and are at least a little interesting – so, as things stand, the Cubs could just give every in-house lefty a chance to impress in the Spring, and then take the best of the bunch to Chicago.

Indeed, what the Cubs could do is bring Kickham to camp, see how he looks as a reliever – does the velocity play up? is the slider a strong enough second pitch that he can just go fastball/slider? – and then, if he doesn’t make the team, the Cubs can option him to AAA Iowa where he could resume starting, or continue a move to the pen.

All in all, Kickham looks like a long-shot to break out in a big league role at any point in the future, but he also looks like the kind of guy you’re mighty happy to get for free on the waiver wire.

Some video on the Cubs’ new lefty: