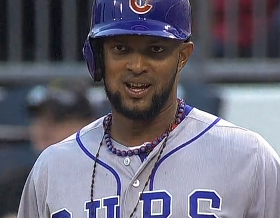 We’ll probably remember him even more fondly if catching prospect Victor Caratini breaks out this year, but you’ve got to like what Emilio Bonifacio did with the Cubs last year. Signed to a minor league deal after the Royals inexplicably cut him loose before the season, Bonifacio gave the Cubs speed and versatility for the early part of the season (and an insanely hot streak to start the year), and then made for a nice trade chip come the deadline. The Cubs were able to parlay their low-cost Bonifacio pickup (together with lefty James Russell) into a really nice prospect in Caratini, acquired from the Braves.

Also: lo viste. You can thank Bonifacio for that, and it’s likely to stick around.

For himself, Bonifacio parlayed the solid 2014 season into a nice one-year deal in 2015: $4 million from the White Sox, according to Jon Morosi. Bruce Levine says there’s also a team option for 2016. That’s a good fit, considering the White Sox’s infield needs, though Bonifacio can play wherever.

Bonifacio will join back up with Jeff Samardzija in the revamped White Sox roster. Clearly, they are making no bones about trying to win in 2015, having added big names (Samardzija, Melky Cabrera, David Robertson, Adam LaRoche), as well as spending quite a bit on complementary pieces (Bonifacio, Zach Duke).